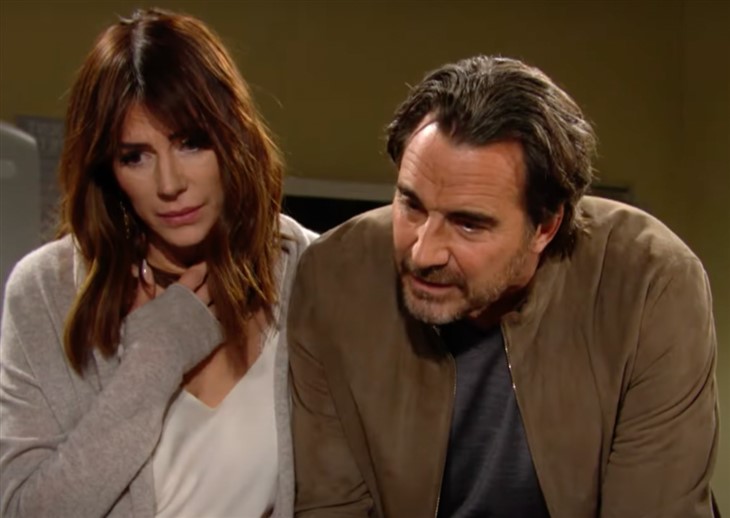 The Bold and the Beautiful (B&B) spoilers tease that Ridge Forrester (Thorsten Kaye) will lash out at Taylor Hayes (Krista Allen) for not speaking up about Thomas Forrester’s (Matthew Atkinson) CPS call blunder. He will praise Steffy Forrester (Jacqueline MacInnes Wood) for telling him the truth, even if he decides not to marry her mother.

The Bold and the Beautiful spoilers say Steffy urged Thomas and Taylor to come clean to Ridge before the wedding. She felt he deserved to know the truth. One of Ridge’s biggest issues with Brooke Logan (Katherine Kelly Lang) was that she lied to him about calling CPS on Thomas. It turns out that wasn’t true. Thomas made the call using a voice-changing app and framed Brooke for making the call.

When Steffy exposed Thomas’s big lie, Ridge couldn’t believe his son would betray him that way. It broke his heart as he realized his son’s betrayal. Ridge blurted out that he couldn’t believe that Thomas would destroy his marriage to Brooke, knowing how much he loved her. His heartache was apparent, while Thomas appeared unfazed by his father’s pain.

Thomas isn’t the only one that will hear an earful from Ridge. B&B spoilers state Taylor will get a turn, too. Ridge tells her he never imagined she would hide a big secret from him and planned to marry him without telling him the truth.

Taylor will respond by telling Ridge that he lied to her, too. He promised to grow old with her, but that was a lie. He still loved Brooke and would leave her for the blonde, just like he has done multiple times.

The two people Ridge will appreciate are Steffy and Douglas Forrester (Henry Joseph Samiri). He will say Steffy did the right thing by telling him the truth. He will appreciate Douglas for playing the voice recording, proving that Thomas faked the CPS call.

Ridge will walk out and skip his marriage vows to talk to Brooke about Thomas’s lie. He’ll likely beg her to forgive him for believing Thomas after all the schemes he’s pulled. Brooke will be happy that Ridge didn’t marry Taylor, but she will struggle with how he left her. B&B viewers are counting the days until Brooke and Ridge will reunite and remarry.