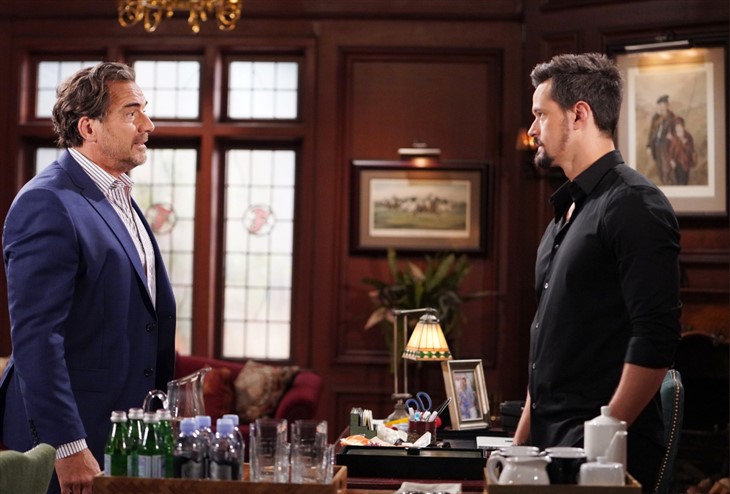 The Bold and the Beautiful (B&B) spoilers show that Brooke Logan (Katherine Kelly Lang) has taken advantage of a situation and called child protective services on her husband’s son, Thomas Forrester (Matthew Atkinson). While this is a bit funny and something that Thomas will have to explain, I think it’s going to come back and bite Brooke in the butt.

While she took what Thomas said to her as a threat, she felt like she needed to get even, and not only that, she may have ended up helping her daughter, Hope Logan (Annika Noelle) in her custody battle against Thomas, if only for a moment.

There is no doubt that Ridge is not going to be happy with what his wife did by calling CPS on his son. This is going to cause more of a rift between the two of them and most likely cause Ridge to think about how his life with Taylor Hayes (Krista Allen) could be.

He’s already been getting a lot of push from his children, especially Steffy Forrester (Jacqueline MacInnes Wood). Could this be the pushing point though, and will Ridge end up divorcing Brooke over this CPS call? I don’t think it will be “the” reason, but it will definitely factor in.

Brooke was already walking a tight rope with her husband, but this has made it much worse and I don’t think he’ll stay with her.

We’ve been in the middle of a draw for the last few months (decades) between Ridge, Brooke and Taylor, and this time around it felt like we were just waiting for one of them to make a mistake and make it easier for the other to choose.

It looks like Brooke may have messed up first and because of that, Ridge’s decision just got a lot easier. Is it the right decision? Maybe… maybe not, but it looks like he will be making his choice soon. How could he stay with the woman who called CPS on his son in the middle of a custody suit?

Thomas’s butt is about to burn as he now has to deal with this in the middle of his fight for his son, and even assuming CPS doesn’t find anything, it will still be another tarnish on his record.

What do you think? Did Thomas deserve to have Brooke call CPS on him and do you think what he said to her was a threat? Share your thoughts and remember to keep watching the CBS soap to see what happens next.