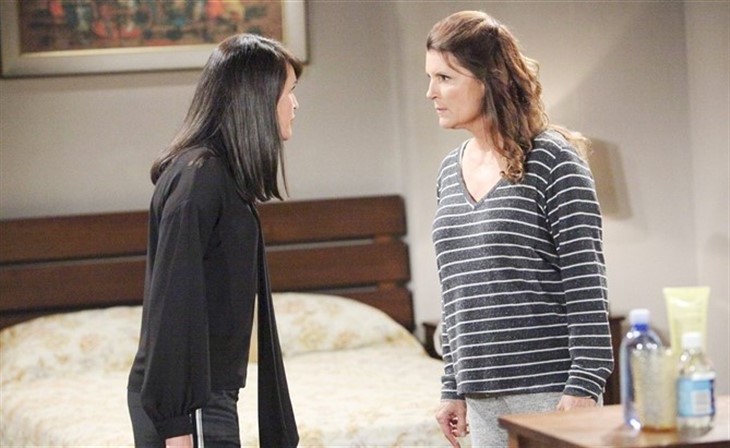 The Bold and the Beautiful spoilers show that Rena Sofer (Quinn Fuller) has announced that she has left the soap opera and will be pursuing her ceramics business! She made the announcement on social media and said August 5, 2022, was her last day on set.

This has come as quite a shock to fans who feel like they were blindsided by the news and now we will only get a few more weeks of Quinn on-screen before her shocking exit. So, the question most people have is, will it be a happily ever after for Quinn and Carter Walton (Lawrence Saint-Victor), or will Quinn experience a shocking and sudden end?

The Bold And The Beautiful – Happily Ever After?

To makes things worse, Quinn has just gotten her storybook ending with Carter and even crashed his wedding after riding a bike over to prove her love for him. He graciously accepted her and it seemed like they were destined to live their lives together forever.

Now though, some are worried that Quinn could meet her end a bit more violently, and with Sheila Carter (Kimberlin Brown) rumored to still be alive and out there, could there be a messy meeting between the two and Sheila kills Quinn to keep her quiet about her being alive?

B&B Spoilers – A Deathly Meeting In The Woods

We speculate that Quinn and Carter may be looking for the perfect getaway and book a cabin in the woods. However, this will quickly turn into a horror movie when they arrive and find Sheila hiding out and nursing a chopped-off middle toe.

Sheila will do anything to keep news about her survival quiet, and this could be where Quinn meets her unfortunate end. Sheila will immediately pounce on them and in the tussle, Quinn will end up dying. With it coming down to just Sheila and Carter, she may make her quick getaway or try to finish off Carter before he spreads the word.

Hopefully, we won’t see Quinn’s The Bold and the Beautiful story short-lived and rushed to an end like this, and we hope that she does end up just leaving town with Carter so that someday in the future, we may see her return again. However, for the next few weeks, we may have to hold our breath as the uncertainty is up in the air.

What do you think? Will Quinn end up dying to Sheila or will she find her storybook ending with Carter? Let us know in the comments below.