B&B Spoilers: Carter And Quinn At Odds: No More Babies For Quinn 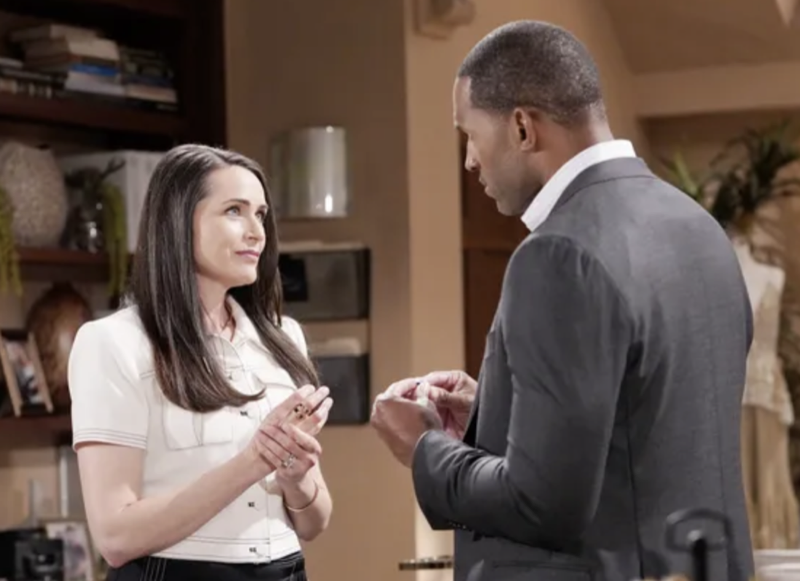 The Bold and The Beautiful (B&B) spoilers tease that Carter Walton (Lawrence Saint-Victor) and Quinn Forrester’s (Rena Sofer) first big fight might be over having a family together. BOLD viewers will recall Carter has said he wanted to settle down and have a family, whereas Quinn’s done with that part of her life.

The Bold And The Beautiful Spoilers: The Roadblocks Were Removed For The Couple To Reunite

When Quinn and Bridget Forrester (Ashley Jones) walked in on Eric Forrester (John McCook) and Donna Logan (Jennifer Gareis) in their love nest, a months-long affair was exposed. The thrill was gone for Eric where Quinn was concerned for months, whereas Donna was able to relight his fire; this was the insult of all insults for Quinn. However, Eric quickly removed the roadblocks for Quinn to build her life with Carter, even sending her over to stop his wedding that had begun to Paris Buckingham (Diamond White).

Quinn got there in time to stop the wedding, and Carter reunited with Quinn, breaking Paris’ heart, but that doesn’t mean it’s happily ever after for “Quarter”. There are some issues they haven’t even talked about with each other, one being that Carter wants children; if not his own, then adopted, or perhaps even a surrogate.

After the honeymoon is over, so to speak, Carter’s wanting a family will crop up as a major issue for Quinn; she’s done with babies. For one thing, there is her age – even though she had Wyatt Spencer (Darin Brooks) at a young age, perimenopause may have started; and her biological time clock is running out. It’s been many years since Quinn had to deal with a baby and she doesn’t seem particularly fond of them; when around them she’s not one to coo and fuss. With Paris, or even her sister Zoe Buckingham (Kiara Barnes) there wouldn’t have been an age issue but Quinn won’t even adopt; that’s going to be a huge thing for Carter. It’s enough to struggle with never having children of his own, let alone never having any at all if he stays with Quinn.

The Bold And The Beautiful Spoilers: Quinn Forrester Comes With Baggage

Quinn also comes with hefty amounts of baggage, and that’s not just talking about her jewelry and wardrobe. Quinn has always been a feisty one, and she interferes in a lot of things that are none of her business at all. For one, she tends to want to run her son’s life, although with him involved with Flo Logan (Katrina Bowden) her best friend’s daughter she seems to be okay now.  Before Flo came into his life, there was a time when she interfered with Liam Spencer’s (Scott Clifton) wedding to Hope Spencer (Annika Noelle) because Wyatt wanted her.

Quinn rushed – again on a bicycle – to stop that wedding and managed to get Hope and Wyatt on a yacht where they got married. However, that bride was willing, unlike Paris with giving up Carter – Hope wanted to be with Wyatt and left Liam.

Another thing that will quickly become a major issue for Carter, so far having his blinders on, is Quinn’s temper and her penchant for revenge. Even though she is happily with Carter now, she still must exact revenge on Donna for stealing Eric, and it’s a turnoff for Carter. He doesn’t understand why she just can’t let it go, it’s not like she and Eric are even together anymore and she’s still acting possessive of him. He could understand it if this had happened right away when she discovered the affair, although poor Bridget would have been witness to it. What if Carter made a mistake with another woman – not that he plans to – and it was discovered, or they broke up-he doesn’t like Quinn’s possessiveness.