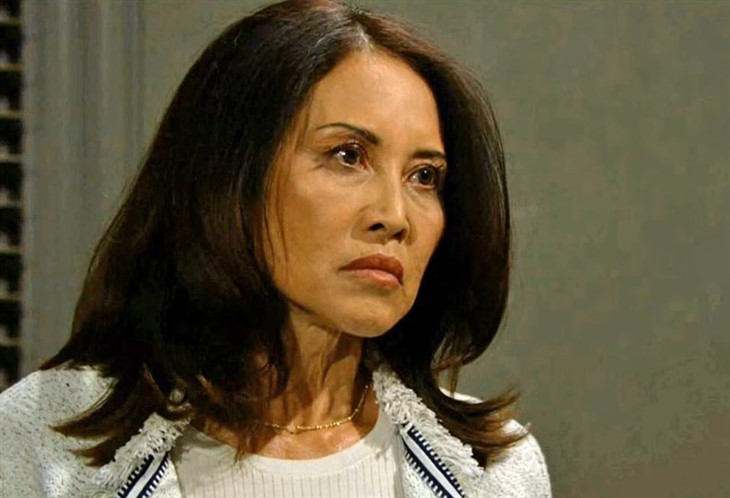 The Bold and the Beautiful (B&B) spoilers and updates tease Dr. Li Finnegan (Naomi Matsuda) is looking for a fresh start. Li has been trying to protect her son Dr. John Finnegan (Tanner Novlan) from his biological mother Sheila Carter (Kimberlin Brown). Li got the help that she needed to save Finn from Bill Spencer (Don Diamont). Li has trying to make a decision about her marriage to Jack Finnegan (Ted King). Li may be ready to find a new love.

The Bold And The Beautiful Spoilers – Dr. Li Finnegan Betrayed By Jack Finnegan

Li had to take action when she found out that Finn and his wife Steffy Forrester (Jacqueline MacInnes Wood) had been shot. Li did not know that Sheila had shot Finn and Steffy. Li was told by Finn’s doctors that he would not survive. Li took matters into her own hands and saved Finn. Li wanted to tell Steffy that Finn was alive when he recovered but Sheila found out that Finn was alive. Li wanted to go to the police to get help to keep Sheila away from Finn. Sheila nearly killed Li by forcing her off of the road.

Li was disoriented and needed help. Li was reluctant to take the help that Bill wanted to give her. Li did not know that Bill was going to be the one to help her to save Finn from Sheila. Li believed that she could get Bill to help her when she saw Bill with his son Liam Spencer (Scott Clifton). Li knew that Steffy trusted Liam. Li told Bill and Liam that she needed help to save Finn. Bill took Li to find Finn and was shocked to find that he was alive. Bill told Li and Finn that he would make sure that Finn got to Steffy.

The Bold And The Beautiful Spoilers – Dr. Li Finnegan Decides That Bill Spencer Is Her New Romantic Future

The Bold and the Beautiful spoilers say Li had been unsure about her relationship with Jack. Li may believe that she cannot find her way back to Jack. Will Li decide that her relationship with Jack is over? Li has been grateful to Bill for helping her and Finn to reunite. Will Li find that her feelings of gratitude will turn into love for Bill? Li may find that she and Bill have much in common. Li may find that she can relate to Bill because he does what it takes to protect his family. Will Li and Bill bond over their love for their families? Li could decide that Bill is the right man for her. Will Li decide that she wants to pursue her new found relationship with Bill? Be sure to catch up on everything happening with B&B right now. Come back here often for The Bold and the Beautiful spoilers, news, and updates.

B&B Spoilers: Will Taylor Admit That Liam Is Bill’s Shooter