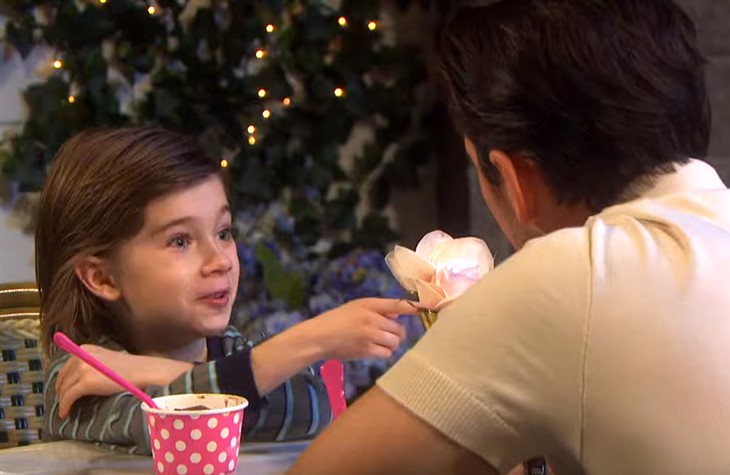 Days of Our Lives spoilers reveal that NBC has released the promo clip for the week of August 8. There are scenes featuring Thomas DiMera (Cary Christopher), who points the finger at the “Tooth Fairy.” Chad DiMera (Billy Flynn) confronts Leo Stark (Greg Rikaart). Plus, Xander Cook (Paul Telfer) shows up at the prison dressed as a priest.

DOOL spoilers reveal that Leo hid in the DiMera tunnels at the same time that Abigail DiMera (formerly played by Marci Miller) was murdered. That morning, Thomas encountered Leo, who claimed that he was the “Tooth Fairy.” Later, Thomas tried to tell Abigail about the “Tooth Fairy.” However, the conversation was interrupted.

Fans have been waiting for Thomas to tell Chad about Leo. That is finally going to happen during the week of August 8. In the weekly preview clip, Thomas is with Chad when he sees Leo walking by. That is when Thomas points at Leo and says that’s him, referring to the “Tooth Fairy.”

Of course, Chad jumps out of his chair and rushes over to Leo. Chad grabs Leo and calls him out on hiding in the DiMera basement the night that Abigail was murdered. Leo is terrified and has some serious explaining to do. It appears that Leo might know more about what happened that night than he is letting on.

However, Rikaart is on contract. That doesn’t mean he won’t go to prison or exit. It does suggest that Leo could stick around for a while, though. So, maybe Leo didn’t kill Abigail but saw who did.

Days of Our Lives spoilers reveal that the weekly promo clip shows Xander dressed up as a priest. Xander strolls into the prison and introduces himself as Father O’Brien. Xander clearly has a plan to get answers.

Perhaps this includes getting records of Gwen Rizczech’s (Emily O’Brien) visitors or phone calls. In Soap Opera Digest, there is a photo of “Father O’Brien” at the prison staring at a computer.

Xander’s priest impersonation would go along with the spoiler that centers on Ava Vitali (Tamara Braun). Next week, Xander and Sarah Horton (Linsey Godfrey) try to get Ava to turn on Gwen. However, will they be successful or could there be another twist in this story?

What do you think is going to happen with Chad, Thomas and Leo? Does Leo actually know who killed Abigail? What does the future hold for Sarah, Xander and Gwen? Share your thoughts and remember to keep watching the NBC soap to see what happens next.