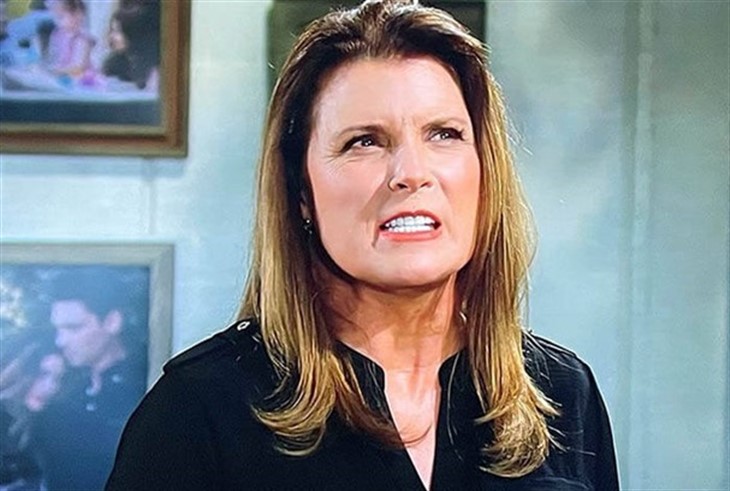 The Bold and the Beautiful spoilers document that Li Finnegan’s (Naomi Matsuda) first mistake was opening the door. Why did she do that when an unknown person was pounding relentlessly on the door.

Li’s greater mistake was not taking control of the situation when Sheila threw her off and went into the room where Finn was being cared for these past weeks on B&B. Li had an opportunity to knock Sheila out when her back was turned and contact the authorities.

But Li was conflicted because of the hidden setting where she is keeping Finn and hesitated. That led to Matsuda’s character being rendered unconscious by Sheila.

It was incredible that Steffy Forrester Finnegan (Jacqueline MacInnes Wood) did not die in the alley behind Il Giardino. She was shot at point-blank range by Sheila.

Sheila has terrible aim. She did not hit Steffy in an area of her body that would have resulted in certain death.

Ridge Forrester (Thorsten Kaye) and Taylor Hayes (Krista Allen) contacted their loved ones after Deputy Chief Bradley Baker (Dan Martin) informed them that Sheila escaped from custody while an attempted transfer to federal prison took place. Steffy was taken aback by the news. The implication is that the fans will see her on-screen shortly.

Sheila was flabbergasted to see Finn lying in bed rather than reading his headstone. Brown’s character thought Finn was dead.

Li rejected Sheila’s demand that she tell her what happened. But the mother Finn knew for the bulk of his life relented and provided Sheila with details.

Sheila thanked Li for keeping Finn alive. Then, when Li rushed to Finn as he began to mumble what appeared to be the word mom, Sheila hit Li across the back of the head. She fell to the floor as Sheila began to console Finn, whose clearing vision was seen through the viewer’s perspective.

Sheila needs to remain free while also ensuring that her son receives what she feels is proper medical care. It is fair to speculate that Finn could be on the move again.

But can Sheila plausibly keep Finn stable if she tries to relocate him? And what happens to Li, who is a threat to Sheila’s freedom?