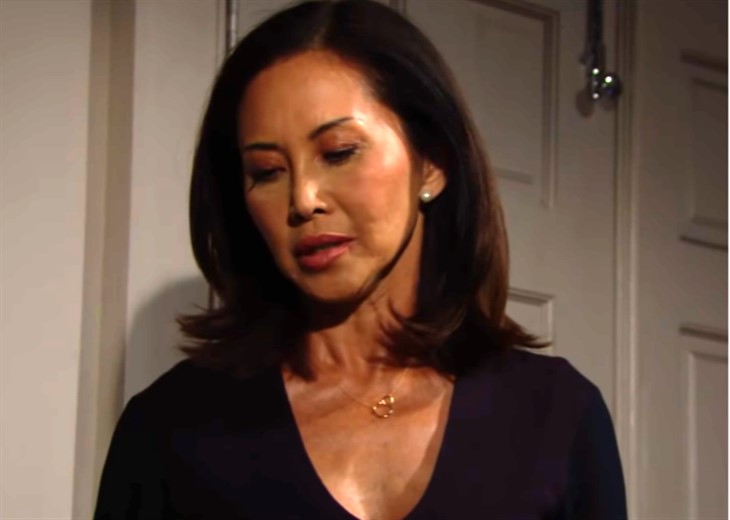 The Bold and The Beautiful spoilers and updates tease that Li Finnegan (Naomi Matsuda) will continue to take care of her comatose son at home, life support and all! Future BOLD episodes will reveal she’ll want to “take care” of his birth mother Sheila Carter (Kimberlin Brown) too!

Two different ambulances connected to two different hospitals had arrived at the crime scene where Steffy Forrester Finnegan (Jacqueline Macinnes Wood) and John “Finn” Finnegan (Tanner Novlan) laid unconscious. One set of paramedics took Steffy to the hospital where Finn and Dr. Bridget Forrester (Ashley Jones) worked, and the other took Finn to Li’s hospital. Li was working emergency room duty that night and obviously must have been in shock seeing her son in the back of the ambulance!

The team of paramedics with Finn had thought he was dead when they took him, as they had told Deacon Sharpe (Sean Kanan) after he had called 911. But when they arrived at Li’s hospital, she found he still had a very weak pulse and was told not to resuscitate so she signed the death certificate!

Li was not about to let her son die when she knew there was hope, over a hospital bureaucracy decision and she smuggled him home likely with some hospital equipment! After all, not every doctor even has a little black bag these days let alone a set of life support equipment to handle emergencies! She was determined to try and resuscitate her son at least to a more stable heartbeat and was able to do that and went from there. She has been tending to him and has had him on life support ever since while not letting anyone else in the loop!

Li knows her son was a great doctor until he was mowed down at the hand of his so-called birth mother Sheila and laid close to death in a back alley. For that, she blames Steffy – and the Forrester family, because if he had not gotten involved with them Sheila never would have come into their lives. She’d also be blissfully ignorant of Jack Finnegan’s (Ted King) affair with Sheila thirty-something years ago, and still be married, but keeping adultery a secret for that long killed it!

Li doesn’t trust anyone involved with the Forresters and that includes Steffy and especially Steffy, after seeing her in the arms of her ex-husband Liam Spencer (Scott Clifton)! She can’t tell anyone that Finn survived, thanks to her, and that she has him on life support waiting for him to wake up!

Li already hates Sheila because she was her husband’s mistress when she was working residency, meaning she was at the hospital nearly twenty four seven! Li was the one who loved and raised Finn from a newborn thinking that it was a private adoption arranged through a reputable baby broker. Instead, thanks to the Forrester family, thanks to Steffy and thanks to Sheila she finds out he was her husband’s love child from a tawdry affair! She visits Sheila who is now in jail awaiting trial and deals with her even more harshly, throwing in her face she was never Finn’s mother! What mother points a gun at her own son and kills him in front of his wife-of course, keeping his actual survival a secret!