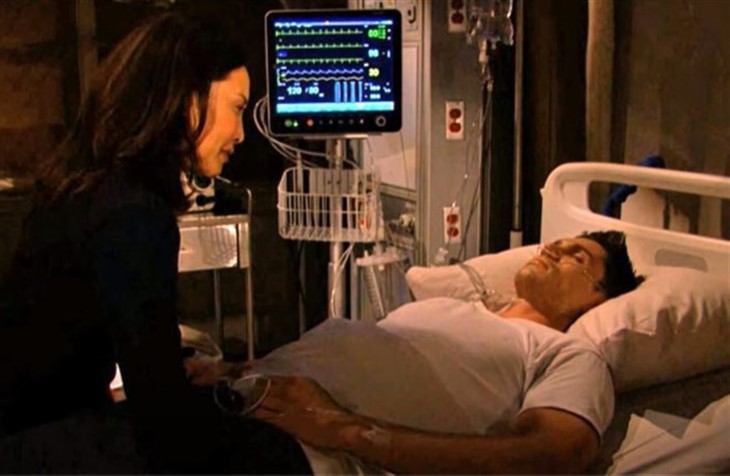 The Bold And The Beautiful (B&B) spoilers and rumors tease that with John “Finn” Finnegan’s (Tanner Novlan) lack of brain activity, once he does awaken he could have a personality change!  He may even wake up more like his birth mother Sheila Carter (Kimberlin Brown) and take vengeance on her in future BOLD episodes!

Recent BOLD episodes revealed that Li Finnegan (Naomi Matsuda) faked her son’s death and put him on life support apparently at home, where she watches over and talks to him. It turned out that the ambulance that picked him up from the crime scene where Sheila had shot both him and his wife took them each to different hospitals. Steffy Forrester Finnegan (Jacqueline Macinnes Wood) was taken to the hospital where Finn and Dr. Bridget Forrester (Ashley Jones) worked, Finn to where Li worked.

Li refused to believe the paramedics who thought they knew with no brain activity he couldn’t be revived. Instead of signing the death certificates and leaving him in the hospital morgue she signed them and took him home!

The mind is part of the brain, and right now Finn is brain dead – he’s on total life support, meaning the life support is maintaining his body until his brain heals. Li is hoping for miracles that medicine may not provide – everything in the body including the mind is run by the brain, and she hopes a god exists. The personality also resides in the brain as part of the mind – if by some miracle he revives will he be the same; will Finn’s memories come back? More importantly, will his personality be the same or will he be different – will he be like Finn, or might he be more like Sheila?

Previous BOLD episodes revealed that Thomas Forrester’s (Matthew Atkinson) brain aneurysm made him fall in love with a mannequin! Thomas couldn’t tell between the real Hope Logan Spencer (Annika Noelle) and a lifelike mannequin and that was because of the location of the aneurysm in the brain! It was actually Finn who diagnosed him and helped save his life after Hope found Thomas in dire straits, passed out on the floor.

Once Finn revives, there are questions if he will be the same Finn like Thomas came back to the same Thomas, or if he might be different. Unlike Thomas, whose brain activity never ceased, Finn’s did!

B&B Spoilers – He Revives, He Remembers, And He Rages!

There is a pretty good possibility that when he revives, he will remember what Sheila did not only to him but to Steffy, he jumped in front of the gun! With the trauma to his brain, his memory, his family, he might come back with rage and revenge, his DNA being part Sheila Carter; it may be nature versus nurture! No one has been able to take down Sheila for good, not even any of her other children, not that they ever tried; will Finn be the one? None of his sisters had the rage of Sheila against Sheila, they just rejected her and she’d put all her hopes in him. It may be a vengeful Finn whose rage matches hers and he may take her out for good!