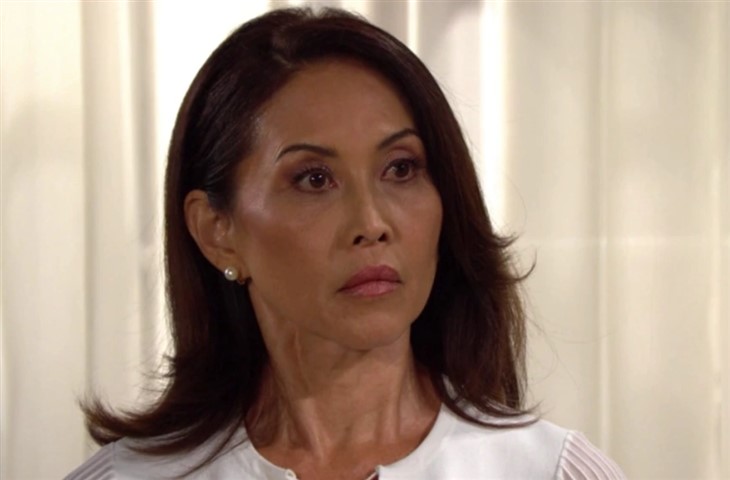 The Bold and the Beautiful spoilers reveal that soon everyone learns that John “Finn” Finnegan (Tanner Novlan) has been shot. Now Sheila Carter (Kimberlin Brown) has a gun pointed at Steffy Forrester Finnegan (Jacqueline MacInnes Wood). What is Steffy’s fate? Plus, one woman will get a clue while Li Finnegan (Naomi Matsuda) is on the warpath.

The Bold And The Beautiful Spoilers –  Deacon Sharpe’s Horror

B&B spoilers reveal that during the week of April 4, Sheila will continue to spiral out of control. As Sheila is going berserk in the alley behind Il Giardino’s, Deacon Sharpe (Sean Kanan) comes across a bloody scene. Deacon finds Sheila in a frantic state. It is teased that Deacon consoles Sheila, so he probably doesn’t know that the villain is the reason for all the bloodshed.

As for Finn’s fate, the good doctor appears to be dead. Finn struggled to hang on and must have known his injury was life-threatening. As Steffy went over to Finn, he said his goodbyes and love you’s. However, there is reason to believe that Finn might survive or does die but is brought back.

Bridget Forrester (Ashley Jones) is back in town. So, she will likely jump into action when Finn is brought into the hospital. However, what about Steffy?

The Bold And The Beautiful Spoilers – Steffy Forrester Finnegan’s Future

The Bold and the Beautiful spoilers reveal that Sheila remains free after the shooting. So, that indicates Steffy doesn’t or can’t tell everyone that Sheila is responsible. Plus, Deacon would be horrified rather than empathetic toward Sheila if he knew the truth.

Based on several clues, it seems that Steffy is injured and isn’t able to speak. Steffy might not even be conscious, but the character probably isn’t being killed off. Wood is going on maternity leave, so an injury that leaves her in a coma would make the most sense.

Li is going to come back into town when she learns what’s happened to her son. However, Sheila seems to think it’s appropriate to act like the doting mom to Finn. Li isn’t going to take this well and will explode. In fact, Sheila and Li get into a verbal war and before that turns physical, Taylor Hayes (Krista Allen) tries to keep the peace.

The Bold And The Beautiful Spoilers – What Else To Expect: Week of April 4

As for what else to expect during the week of April 4, Liam Spencer (Scott Clifton) will get advice on Steffy and Hope Logan Spencer (Annika Noelle) from Bill Spencer (Don Diamont). Brooke Logan Forrester (Katherine Kelly Lang) starts to piece things together.

Taylor and Ridge Forrester (Thorsten Kaye) discuss Sheila’s mental health, a conversation that just makes Thomas Forrester (Matthew Atkinson) even edgier. Plus, Ridge makes a heartbreaking plea to Steffy, which could be begging her to wake up as her children need her.

Hope will tell Steffy about all the positive things she’s done in her life. All of these seem to imply Steffy lands in a coma. Unfortunately, Sheila will end up making her dream come true. Even though Sheila might get what she wants now, justice will come for her eventually. The truth always comes out in soaps, but it might not be until Steffy wakes up.