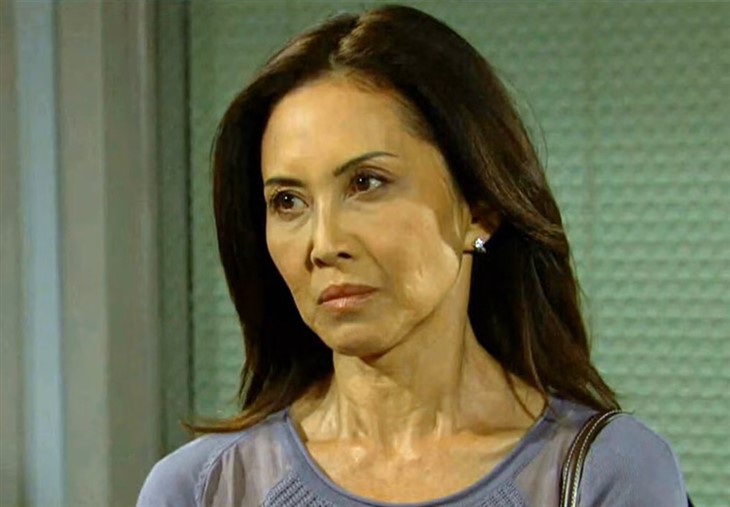 The Bold and the Beautiful (B&B) spoilers for Monday, May 23, 2022, reveal a real mother coming to terms with what happened to her son.

It’s been nearly two months since Sheila Carter (Kimberlin Brown) killed John ‘Finn’ Finnegan and shot his wife, Steffy Forrester (Jacqueline MacInnes Wood), but all we have hard about is Sheila’s son and how she is mourning her son and shot her own son. She even tried to jump off the hospital roof over what she did to her son and Taylor Hayes (Krista Allen) nearly died with her.

But he wasn’t really her son. She gave him away at birth and only revealed herself to him the second he became a member of the Forrester clan. Why did she wait so long if it was the last chance to have a relationship to one of the many kids she has allegedly given birth to? Did anyone do a DNA test to see if she was even telling the truth?

After all, Finn did have a woman who raised him not knowing where he really came from and that is Finn’s real mother. On Monday, Steffy finally talks to her actual mother-in-law.

Li Finnegan (Naomi Matsuda) can’t believe her ears when she learns that Sheila killed HER son because she doesn’t consider Sheila to be Finn’s mother. She knew that woman would hurt her child one day, but never imagined she’d take his life. She is devastated and angry that she never knew who she had to protect her son from all these years. Will she take it all out on Jack Finnegan (Ted King) for lying to her for decades?

Some fans even think Li and Jack are keeping Finn alive somewhere, which is possible because it’s a soap, but odds are this is just a mother in mourning who can’t believe how her life was turned upside down in the most unimaginable way. With Finn gone, will Jack and Li stick around to at least have a relationship with the grandson, Hayes? Or is the soap done with them now? Stay tuned to The Bold and the Beautiful weekdays to see how these stories play out.