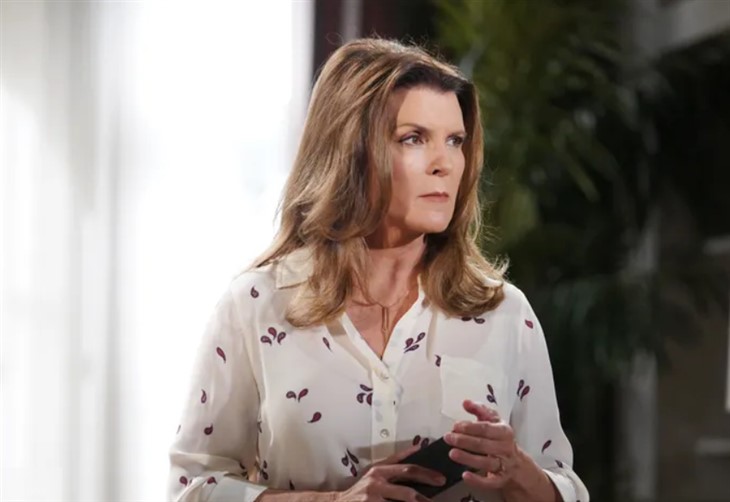 The Bold and the Beautiful spoilers document that rumors of Sheila Carter’s (Kimberlin Brown) death can not be confirmed. The lack of a body is very soapy on B&B.

Devoted fans of this show and daytime, in general, know that a villain of this caliber can suddenly return, be that days, weeks, months, or years from now. Sheila’s hair, middle toe, and some personal items being located have convinced the Los Angeles County authorities that this story line is over.

However, Brown’s photo still appears on B&B’s online cast page. That alone does not prove Sheila is alive and will return. But why not remove it and authorize Brown to say farewell to the audience through a social media feed?

If Sheila were dead, meaning that her body was found and shown to the audience, then closure would happen. That climax would be milked for buzz.

A major sendoff would be in order if Brown were retiring from the profession or if TPTB at B&B decided that this crossover character went as far as she could go.

While there would be a personality percentage that would not accept that type of purposeful announcement, it probably would convince most.

Eric Forrester (John McCook) inexplicably is not known to have contacted Lauren Fenmore Baldwin (Tracey Bregman) in 2017, when Sheila returned. That comeback followed a decade’s absence from the soap world, with Brown’s character said to have been killed by Lauren on Y&R.

McCook’s character is not known to have contacted Lauren about Sheila’s death. That does not make sense, as he and Bregman’s characters are friends and were once romantically involved. He knows Lauren would want to know Sheila was supposedly killed by a bear.

But there was a problem with the ending described above. Sheila was said to have transformative facial surgery, with her appearance mirroring Phyllis Summers’ (Michelle Stafford in a dual role).

Sheila’s appearance in LA, and her responses when asked about her apparent murder years earlier, revealed that some other woman became the Phyllis look-a-like. This unresolved issue was not addressed on either soap.

Sheila is a fugitive. It would seem illogical for her to travel to GC, as Paul Williams (Doug Davidson) would likely assign Chance Chancellor (Conner Floyd) to facilitate her return to LA.

A story line of this magnitude would hopefully allow Davidson’s iconic Y&R character to be written back into the show. Brown’s character is iconic as well. Sheila’s daytime debut happened on Y&R in 1990, with her historic B&B crossover happening in 1992.

B&B offered a mini-Sheila retrospective as the Forrester family learned of her apparent death. That means she probably will not be seen for a while. Whether Sheila crosses back to Y&R and seeks out Lauren is an intriguing possibility.

So, Sheila was killed by a bear in a scene that was not shown? No. Someone this infamous could not have been written out in this way, or so fans of great actors and legendary characters hope.