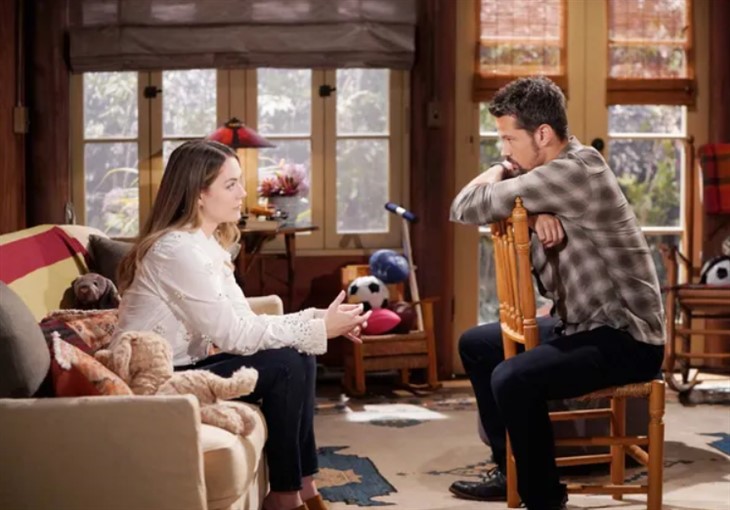 The Bold and the Beautiful (B&B) spoilers for Wednesday, September 21, 2022, reveal more squabbles between grown adults over their parents.

So, it was Steffy who ruined Brooke Logan Forrester’s (Katherine Kelly Lang) romantic plans with Ridge, but it’s Hope who decides to take it all out on Thomas Forrester (Matthew Atkinson). Perhaps Hope is just manifesting her anger over Thomas wanting to spend more time with his son.

When Hope confronts Thomas regarding Steffy’s actions, he defends his sister but the conversation devolves into an argument about Douglas Forrester (Django Ferri). Will this seal the deal for Thomas that he really should go ahead with a court case so he can be more of a father to his son?

Now that Dollar Bill Spencer (Don Diamont) has assured Ridge that he is not after his wife and warned Ridge not to give her up, Bill is moving on and decides to ask Li Finnegan (Naomi Matsuda) to lunch at Il Giordino. She is happy to accept but maybe they should have tried that fish place he frequents with Liam Spencer (Scott Clifton) and Wyatt Spencer (Darin Brooks) where he first found Li.

We all know that the supposedly-dead Sheila Carter (Kimberlin Brown) spends an awful lot of time at Il Giordino. After all, she lives in a tiny apartment there with Deacon Sharpe (Sean Kanan) and she used to work there. When she sees Li, she might devise some new deranged plot because that is something Sheila is apt to do. Both Bill and Li better watch their backs.

Sheila and Li are already mortal enemies and Sheila is a loose cannon. Deacon has been doing his best to try to control her but he is going to have his hands full with Nikki Newman (Melody Thomas Scott) from Genoa City, so it’s possible that Sheila will go completely rogue. Stay tuned to The Bold and the Beautiful weekdays to see how these stories play out.