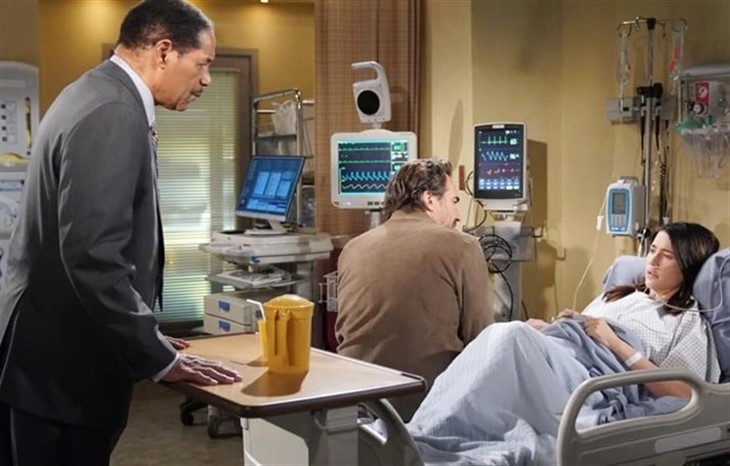 The Bold and the Beautiful spoilers document that Steffy Forrester Finnegan (Jacqueline MacInnes Wood) is about to experience true sorrow. Her body and mind are recovering from the gun shot she suffered just days ago in soap time. Steffy is ready to learn that Finn is gone.

John Finn Finnegan (Tanner Novlan) is believed to be dead. That is what the characters are saying, right?

It is fair to be scrupulous when examining every line of dialogue since Steffy arrived at the hospital and since Deputy Chief Bradley Baker (Dan Martin) began asking questions about this unsolved case. Is a trap being set, using the no-dead Finn as bait?

The Bold And The Beautiful Spoilers – Tanner Novlan Teases Return?

Finn used his Instagram account to post a photo of a script. Buzz about that potentially being a wink to the fans about Finn being alive was generated.

It is not far-fetched to believe that Finn could have survived the shooting. While he was bleeding profusely and passed out, Sheila Carter (Kimberlin Brown) did not offer a certain kill shot to her son.

Finn took the bullet in the lower right side of his chest. The bullet could have passed directly through him, with the Los Angeles Police Department later finding the bullet lodged somewhere in the alley.

The mega event that rocked B&B fans to their core appears to have killed off a very popular character who was part of an equally embraced couple. Why get rid of Finn forever if a change in direction between him and Steffy was desired?

TPTB could have split Steffy and Finn when Paris Buckingham (Diamond White) took an interest in him last year. But that did not happen, which reinforced Finn’s ideal mate nature with Steffy.

A wide contingent of fans would welcome Finn back with open arms if he was not killed by Sheila because they would suspend disbelief. Accepting the improbable or impossible has been a daytime staple for generations. It is an accepted part of this genre.

Executive producer and head writer spoke publicly about the decision to write Finn out, with Novlan exiting the cast. Was that a head-fake as well?

Is is possible that Finn did die and that his unknown twin will enter the show. Sheila had twin boys?

Brown’s character may have knowingly delivered twins and never told Jack Finnegan (Ted King) about his other son. Alternatively, she could be somehow have not known about the other boy.

Maybe Finn is gone, but Novlan is returning in a new role on B&B. If so, that could work.

Fan response to this potential change would be determined based on how the new character was written for an actor they know and like.