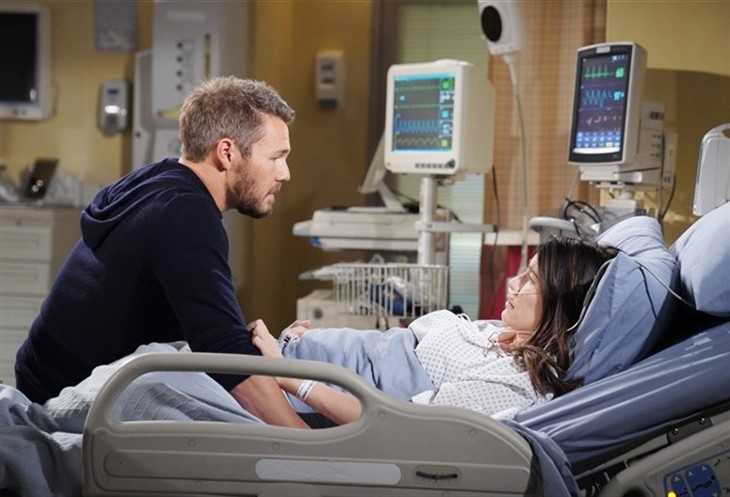 The Bold and the Beautiful spoilers document that Steffy Forrester Finnegan’s (Jacqueline MacInnes Wood) mind will see the current day through Liam Spencer’s (Scott Clifton) compassionate approach. He is the right person to take Steffy’s hand and be a lead person to help her begin dealing with the tragic reality of her husband’s death.

Meanwhile, Sheila Carter (Kimberlin Brown) fears that Steffy’s clearing thoughts will also reveal who murdered John Finn Finnegan (Tanner Novlan) and shot Wood’s character. Scandalous Sheila is caught in Los Angeles, California. Her only hope is that Steffy somehow does not recall that Finn’s mother is his killer.

The Bold And The Beautiful Spoilers – Where Do They Go From Here?

The writing staff has created a compelling and complex story line. It is rather remarkable to have Sheila admit to herself that shooting Finn is the worst thing she ever did.

However, Sheila seems caught between feeling sorry for the pain Taylor Hayes (Krista Allen) is dealing with and deciding if she wants to finish Steffy off. Such are the scattered thoughts of a deranged lunatic.

Brown’s current run on B&B could be limited to a matter of episodes that can be counted on two hands. If Steffy recalls what Sheila did, this villain must run or be caught. But the pending birth of Wood’s third child could mean that a stretched story runs through the summer or into the fall.

Steffy free-willed into a vulnerable position in the recent past. She made the initial choice to use prescription painkillers and then fell into addiction.

The current story had Steffy choose to follow Sheila into the alley when that choice could have been avoided. While Sheila is fully responsible for Finn’s death and Steffy’s shooting, Wood’s character unintentionally set that series of horrible events in motion.

B&B’s arguable leading character will push on because that is what Steffy does. She will honor Finn’s memory while raising their son and Liam’s daughter.

Sheila was broken as a child. She claimed to have killed her father many years ago. Whether it was an act of self-defense or the first dramatic piece of evidence that Sheila was a cold-blooded killer can not be known. Fans only have Sheila’s word to go on and that is worth nothing.

Until Steffy recalls the truth, Sheila will leap to a different fantasy world. In this one, she will be a grandmother to Hayes Forrester Finnegan (Samantha Worden and Piper Harriet) while plotting to rid the world of his surviving parent.