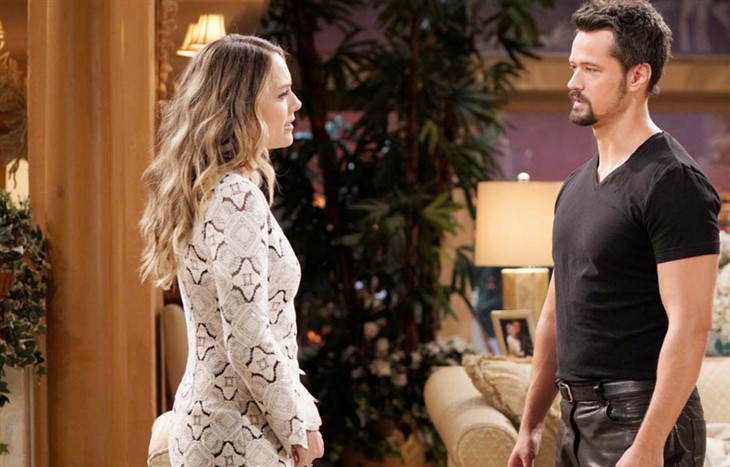 The Bold and the Beautiful (B&B) spoilers for Tuesday, December 6, 2022, reveal Hope and Thomas coming face to face since the big reveal about his CPS call.

Hope Logan Spencer (Annika Noelle) and Brooke Logan (Katherine Kelly Lang) already thanked Steffy Forrester Finnegan (Jacqueline MacInnes Wood) for telling the truth about what her brother did and Brooke already had to deal with Thomas Forrester (Matthew Atkinson) trying to pretend nothing had happened.

Or, he spent his time blaming her because he was raised by such a horrible stepmother. Now, it’s Hope’s turn to deal with the same exact thing.

She can barely believe how nonchalant Thomas was with her mother, but he is completely apologetic to Hope because he can’t have Hope thinking he is a terrible person despite him doing a terrible thing.

However, Hope is not nice to him at all and Thomas finally has to realize he is going to have some personal consequences for what he did. Not only is he going to lose custody of Douglas Forrester (Henry Joseph Samiri), but he is also going to lose Hope’s friendship.

While it’s been fun having Sheila Carter (Kimberlin Brown) as a roommate and a bedmate, it’s pretty clear to Deacon Sharpe (Sean Kanan) that their time together needs to come to an end soon.

Sheila is getting way too daring with her little outings and way too cocky about her entire situation. She thinks she is invincible and Deacon knows that is not true.

To that end, he issue Sheila a stern warning and also lets her know their cozy setup might have to end sooner rather than later.

Wait until Steffy and John ‘Finn’ Finnegan (Tanner Novlan) stop by to see if Deacon has seen Sheila at all over the last few months. Finn is convinced she is alive and the clean cut on her toe gives it away.

Perhaps Sheila didn’t think of everything this time because she can’t pull one over on her doctor son. As a nurse, she should have known that. Is she losing her touch? Stay tuned to The Bold and the Beautiful weekdays to see how these stories play out.