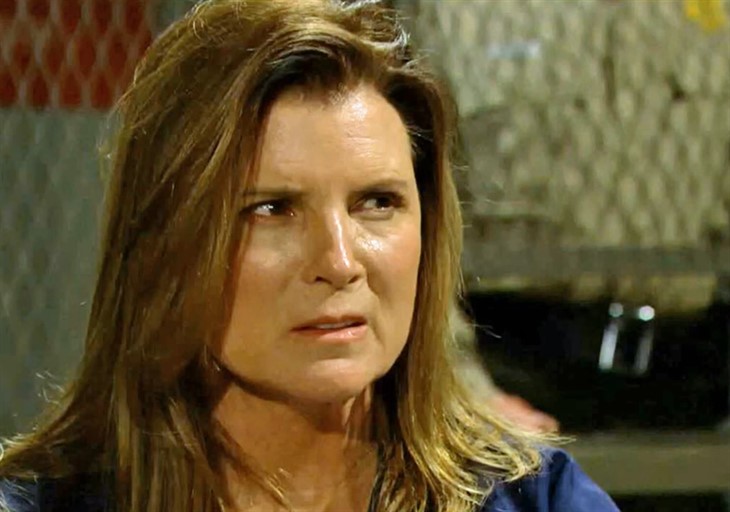 The Bold and the Beautiful (B&B) spoilers for Tuesday, June 14, 2022, reveal a day of heated confrontations that shock all.

Li Finnegan (Naomi Matsuda) thought she was perfectly fine when she told Sheila Carter (Kimberlin Brown) everything she felt in a seething rage when Sheila was safely beyond bars. But Sheila has her ways and her henchman, Mike Guthrie, and managed to escape from prison and make her way to Li’s hotel room. This terrified Li — especially since John ‘Finn’ Finnegan (Tanner Novlan) is hidden in there, comatose, but alive.

There is no way that Li can allow Sheila to find him. He is HER son, not Sheila’s, and she is determined to save him without Sheila around at all. If Sheila learns that truth, that means she is in danger, as is Finn. Sheila is the one who shot him and left him for dead and Li fears what this crazy woman might do another time.

However, Sheila has a lot to say this time and warns Li that she has resources that can hurt her and that she has no problem using them. Yes, Li is scared but she is also tough and one has to wonder if Sheila may have met her match in this woman who is a fierce mama bear to the man she raised as her own.

Hope Logan Spencer (Annika Noelle) can barely believe what she is seeing when she spies Eric Forrester (John McCook) and Donna Logan (Jennifer Gareis) in bed together. She was sure that Eric was faithful to Quinn Fuller Forrester (Rena Sofer) and would never stray. However, this is her little version of Los Angeles where everyone strays and she should know a lot about fickle men since she is married to Liam Spencer.

Hope may not be a fan of Quinn, but she still knows what Eric and Donna are doing is dead wrong. She confronts her aunt and Donna begs her to keep all of this quite for Eric’s sake. Let Eric tell Quinn what’s going on in his due time, not when Hope decides it needs to happen. Hope doesn’t like it, but will she agree? After all, it’s none of her business, but it’s still a secret she may not like keeping. Stay tuned to The Bold and the Beautiful weekdays to see how these stories play out.

Y&R Spoilers: Nikki And Diane Go At It Again

Days Of Our Lives Spoilers: The Suspects In Abigail’s Murder Line Up