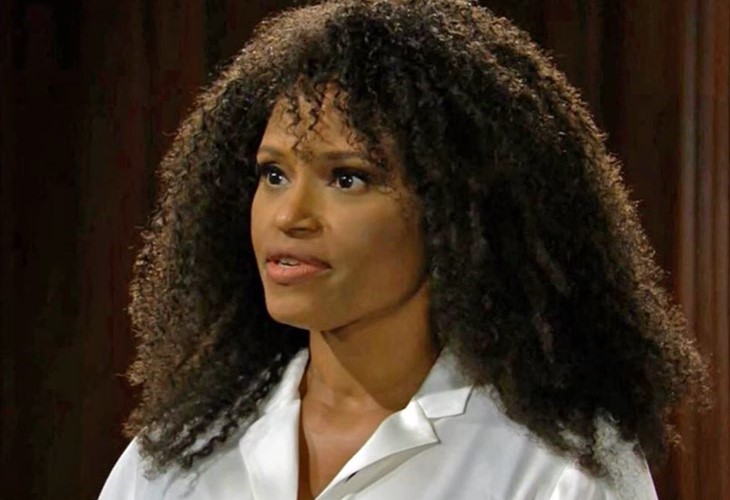 The Bold and the Beautiful (B&B) spoilers tease that Paris Buckingham’s (Diamond White) mom is in town and she has definite ideas on what her daughter’s life should look like. Cassandra Creech is playing the role of Grace Buckingham and she has made a splash with fans who want to see more of Paris and her family.

Creech recently spoke to Soap Opera Digest about her new daytime role and it looks like Grace is going to bring the drama! For starters, Grace has some ideas about her daughter’s love life and the decisions she is making. And she is not afraid to let her opinions be known. According to Creech, her character thinks that Zende Forrester (Delon deMetz) is perfect for Paris. Too bad Paris doesn’t think so! Paris is having a hard time making up her mind about her romantic choices and it appears Grace will offer her opinion whether it’s wanted or not.

Grace thinks that Zende has a great work ethic and is a kind person, excellent traits for her daughter. But when Paris doesn’t endorse her mom’s opinion whole heartedly Grace questions Paris’ state of mind. So who is Paris into? Grace will pick up on a vibe between Paris and Carter Walton (Lawrence Saint-Victor) according to Creech.

The Bold And The Beautiful Spoilers – What Happens Next On The LA Based Sudser?

The beautiful and talented actress said, “She has that intuition and picks up on things,” calling her character a mother hawk. Which may not be the kind of influence that Paris wants or needs right now. Paris’ family members have been a little complicated to say the least, so there may be a lot more to Grace than meets the eye. Her father Dr. Buckingham (Wayne Brady) was a baby snatching criminal and her sister Zoe Buckingham (Kiara Barnes) was not always on the up and up either.

Creech notes that, “Grace is assessing things and at some point, she will move, and I sense it will be a big move. She’s on a mission.” Some fans are speculating that Grace could “move on” with Carter! This would be quite a stunning development, but Carter has shown himself to be of the Brooke Forrester (Katherine Kelly Lang) school of mattress hopping, so an illicit fling with Paris’ mom is definitely not out of the question.