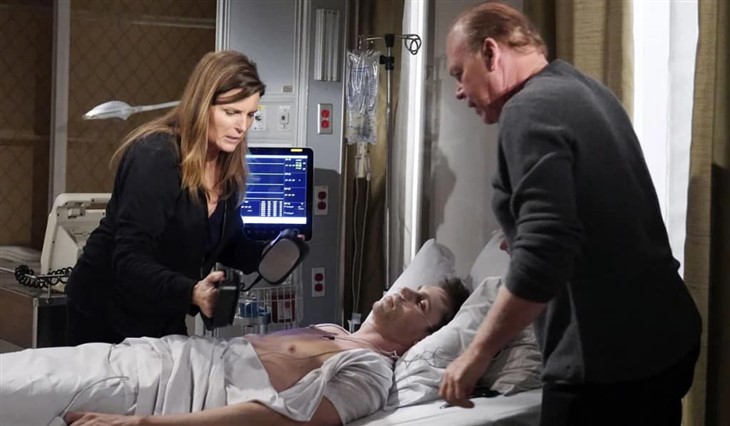 The Bold and the Beautiful spoilers document that B&B’s makeup department did a great job making John Finn Finnegan (Tanner Novlan) look terrible. He was on death’s door, again, and reflected that fact.

Sheila Carter (Kimberlin Brown) shocked Finn’s heart multiple times, which induced a heartbeat. Her son is strong, and that is an ominous sign that she does not recognize.

Mike Guthrie (Ken Hanes) was wrong about Sheila being able to bring her son back from the seemingly dead. She did it based on her version of maternal instinct.

But Mike was right about something else. Sheila is not prepared to deal with Finn’s outrage. That looming fight will provide her with a unique and highly motivated opponent, the likes of which she has never encountered before.

The Bold And The Beautiful Spoilers – Mike Guthrie Is Being Honest

Mike was stunned to see that Finn was alive. He, like everyone else in the soap world, thought Novlan’s character was dead.

So, Mike’s comments to Sheila came after he learned about the reveal. That, along with Finn’s convulsions, morbid-like appearance, and the extended flatline sound on the heart rate monitor, made his plight seem destined.

The Bold and the Beautiful spoilers show Sheila was not pleased with her accomplice after shocking Finn back to life. She was also angered by the truth he told her. If Finn wakes up, then he will recall what happened in the alley.

As Mike rightly questioned, what is Sheila expecting? Unless there is neurological damage, Finn will recall that his birth mother intended to kill Steffy Forrester Finnegan (Jacqueline MacInnes Wood) with the first bullet she fired.

If Finn did not step in front of Steffy, intending to talk Sheila down, Wood’s character would have taken the first hit. Who knows what would have happened next?

But in Sheila’s fantasy world, everyone, including Finn, needs to accept her point of view and be understanding of it. No.

Steffy witnessed her husband fall to the ground and apparently die. Then, she took the second bullet.

Many in Los Angeles, California, had their lives altered by this tragedy. One of them was Li Finnegan (Naomi Matsuda). Imagine Finn’s disillusionment and zeal when he learns Sheila may be or is responsible for her death.

Finn lives by a moral code. Sheila does not. That conflict spark will be ignited this summer on B&B.