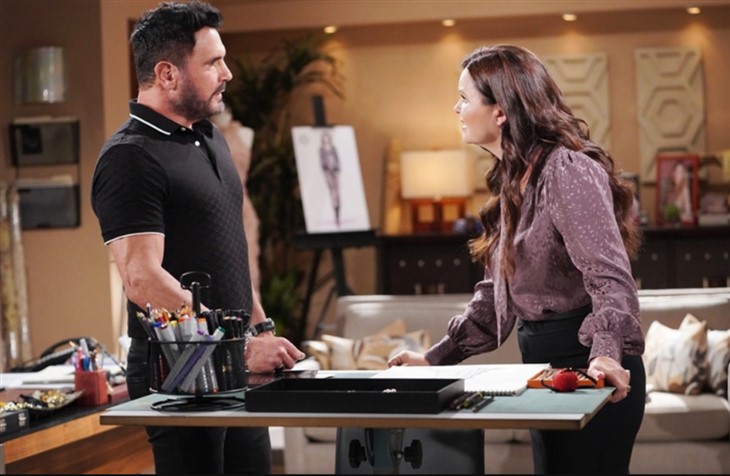 The Bold and The Beautiful spoilers and updates tease that Dollar Bill Spencer (Don Diamont) might come up with a new plot based on an old playbook. He might decide since he can’t get anything going with Brooke Logan (Katherine Kelly Lang) he’ll try to sabotage Carter Walton’s (Lawrence Saint-Victor) budding romance with Katie Logan (Heather Tom).

The Bold And The Beautiful Spoilers – Confrontation

Carter and Bill recently had a heated confrontation over Katie at Brooke’s house after Bill tried to get Brooke back and when she turned him down, he started in on Katie. Carter listened at the door in disbelief at the player using the same lines on Katie as he had on Brooke only a few minutes earlier. Carter had gone to retrieve a pair of special cufflinks for Ridge Forrester, (Thorsten Kaye) who had thought he was getting married that day.

Carter was a little late to the ceremony, which he wound up not completing anyway, but he couldn’t let the scheming Spencer get away with that. In the meantime, as he tore into Bill about Katie needing a real commitment, she was at the top of the stairs listening.

B & B Spoilers – Territorial Tomcat

Bill is like a territorial tomcat that has to leave his mark on every woman he tries to conquer, and when he’s rejected in his advances, he doesn’t take it well. Bill didn’t like Carter’s interference in his pursuit of the two Logan sisters, but it was very disrespectful to use Katie like a backup for Brooke and vice versa. Katie and Carter seem to really have potential for a future with each other, even a possible marriage, but Bill won’t like Carter being a stepfather to his son with Katie. Bill hasn’t even seen Will Spencer (Finnegan George) since he was little, because Katie wanted him away from the divorce drama and put him in school out of town.

The Bold And The Beautiful Spoilers – Old Playbook, New Plot?

During the week of December 5, Bill will take a page out of his old playbook, although it may be a new plot. Bill has tried to derail or sabotage new relationships his former girlfriends or wives have become involved in before. Bill even stopped one of Brooke and Ridge’s reunions by dumping Ridge out on a beach from an aircraft, he was so desperate to get Brooke back.

While Bill might not get Carter on his plane and try to dump him out on a beach, he’s sure to do something to nip his relationship with Katie in the bud. But he may not dissuade her if it’s something like Carter messing up with previous women, Katie already knows about all that and she’s sympathetic!