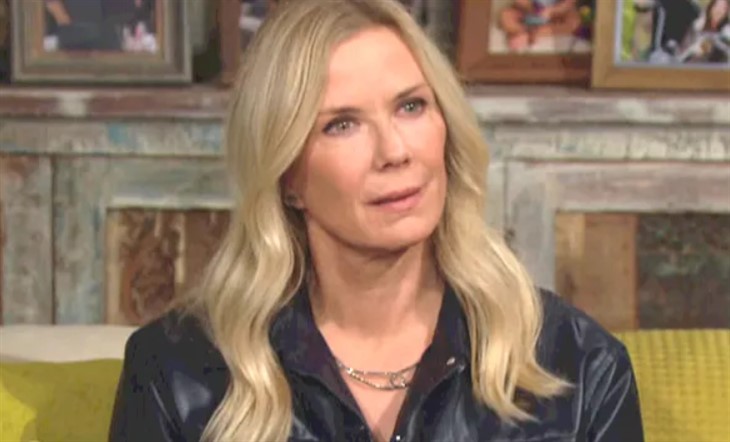 The Bold and the Beautiful spoilers reveal a bit of a mystery showing up at the Forrester mansion and Ridge doesn’t want to believe his suspicions.

The Bold And The Beautiful Spoilers – No Love Lost Here

The week starts out with more fighting between Brooke Logan Forrester (Katherine Kelly Lang) and Thomas Forrester (Matthew Atkinson) where they both get nastier with each other than ever. Thomas is sick of this woman and Brooke just feels her delusional daughter is entitled to any child she sees and wants.

While Thomas certainly says some inappropriate things to Brooke, he does not outright threaten her. However, Brooke feels threatened nonetheless and voices her concerns to Hope Logan Forrester (Annika Noelle), She just feels Thomas is dangerous and definitely too dangerous to have a child in their midst.

After all, who would allow a violent man to raise children? It’s a miracle Ridge Forrester (Thorsten Kaye) was allowed to keep his. He already beat Deacon Sharpe (Sean Kanan) to a pulp this year, but somehow Brooke still thinks he’s the bees’ knees. Her problem is with his son because it could make her daughter have a sads.

B&B Spoilers – A Knock At The Door

According to The Bold and the Beautiful spoilers, Ridge and Thomas are absolutely stunned when CPS shows up at their door to check on Douglas Forrester’s (Django Ferri) welfare. Ridge can barely believe what is happening and both he and Thomas are relieved when CPS leaves believing Douglas to be fine, but who made a phone call to have the agency check up on his welfare? CPS tips are rightfully anonymous, but that doesn’t mean Ridge and Thomas aren’t determined to find out.

Of course, Ridge’s first thought is Brooke because nothing says strong and healthy marriage like this level of mistrust. When Ridge calls Brooke he point-blank asks her if she called CPS on his son.

Brooke is not quite sure what to say to that one but eventually gives Ridge a no. Is Brooke lying to her husband or did someone else make such a move? If so, who could it be? Is Hope so desperate to keep a child away from his father that she’d do such a thing? Stay tuned to The Bold and the Beautiful weekdays to find out.