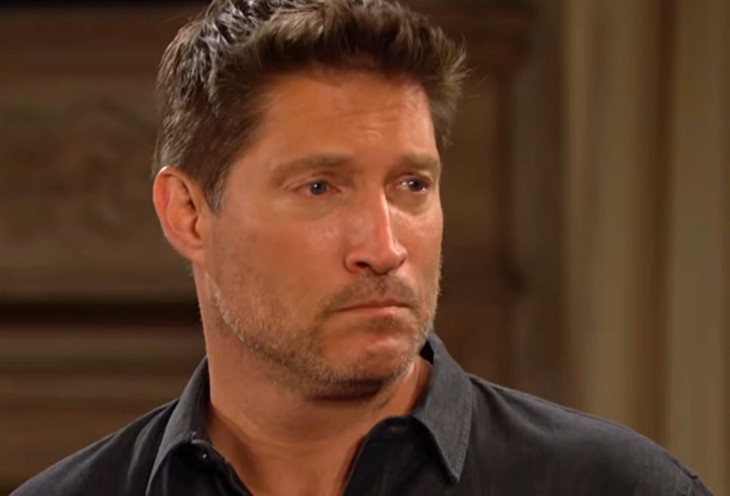 Deacon has a theory that Ridge has been with Taylor Hayes (Krista Allen) so much and so often, with everything that’s happened with their daughter they must be sleeping together! Deacon’s kind of been snooping and keeping an eye out just to judge how they are around each other and their body language. Ridge and Taylor have definitely re-bonded over Steffy Forrester Finnegan’s (Jacqueline Macinnes Woos) tragedy and being strong together for her.

Deacon isn’t watching and snooping around just to get his jollies, he’s got an ulterior motive. He wants to be with Brooke and they and Hope be a family, so he gives his theory to them like he’s really in the know!

While Deacon does have concern for Hope’s marriage to Liam Spencer, (Scott Clifton) keeping an eye on him gives him a good opportunity to do the same with Ridge. Both Liam and Ridge are coming and going from Steffy Forrester Finnegan’s (Jacqueline Macinnes Wood) cliff house and spending a whole lot of time over there.  Liam spends time with his and Steffy’s daughter Kelly Spencer (Sophia Paras McKinlay) but Steffy herself is leaning on him heavily, worrying Hope for her marriage. Ridge is there frequently also supporting Steffy but spending a whole lot of time with Taylor as well, worrying Brooke about her marriage to him. Brooke wants to work things out with Ridge, but it doesn’t look like it’s going to happen and Deacon sees a way in to winning her heart!

Deacon gives Hope and Brooke the latest news on Liam and Ridge, and Steffy and Taylor. This is after he gives them some mind-blowing news about Sheila Carter (Kimberlin Brown); Steffy has gotten some memories back which Liam also confirms. Steffy has accused Sheila of shooting her own son, killing John “Finn” Finnegan (Tanner Novlan) before he shot her and Ridge has been spending the night at the cliff house ever since. At least Liam has been coming home on a regular basis and that first night on Steffy’s couch was a one-time deal.

Brooke and Hope are both in disbelief that Sheila shot her own son, as is Deacon. But none of the three think it’s an excuse for Ridge to be at Steffy’s house twenty four seven when Taylor also lives there!

Brooke also believes Ridge is firmly with Taylor, she has seen it coming for a long time and Hope isn’t surprised either. Steffy and Thomas Forrester (Matthew Atkinson) had been pushing their parents together for several months, and Brooke knew it was the beginning of the end. Ridge has waffled between her and Taylor for years and years, similarly to how Liam has waffled between Hope and Steffy! Deacon comforts Brooke because she knows she’s lost Ridge and he makes sure she knows he’s there to pick up the pieces!