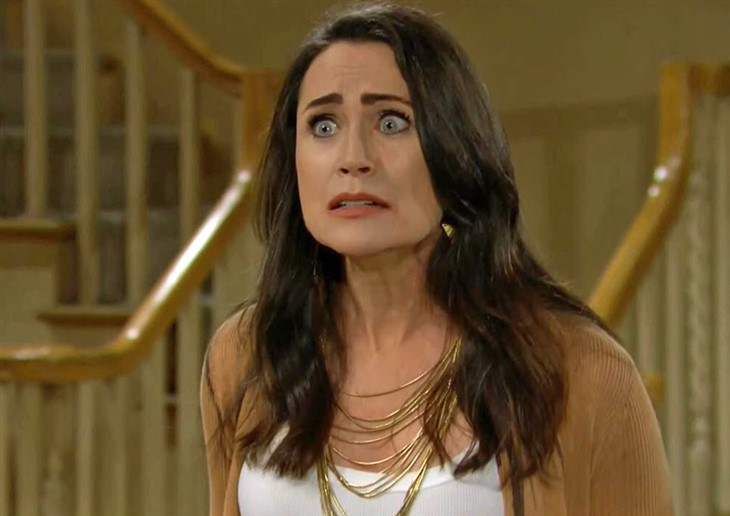 The Bold and the Beautiful (B&B) spoilers reveal that Quinn Forrester (Rena Sofer) will eventually find out about Eric Forrester’s (John McCook) affair. The possibility of losing Eric and Carter Walton (Lawrence Saint-Victor) marrying another woman might be too much for Quinn. Could she go completely insane and kidnap Donna Logan (Jennifer Gareis)?

The Bold And The Beautiful Spoilers – Losing Carter Walton

B&B spoilers reveal that Quinn might be married to Eric but the man she’s passionately in love with is Carter. Even though Carter feels the same way, Quinn refuses to betray Eric again.

However, now that Carter is going to propose to Paris, Quinn is in total panic mode. Quinn tries to beg Carter to reconsider marrying Paris. A wedding is confirmed to take place this summer, so Carter won’t back out of the plan. With that being said, the wedding day might start with the couple at the altar, but it might not necessarily end with a marriage.

While Quinn is in panic mode over Carter, she is also worried about Eric’s health. What Quinn doesn’t know is that Eric is having an affair with Donna. For Quinn, Eric betraying her is one thing. To have that woman be Donna is quite another!

Fans remember when Quinn cornered Donna in the office and threatened her. Quinn made sure that Eric banned Donna from Forrester Creations as well as their home. However, to be fair, Quinn never said anything about the club.

The Bold And The Beautiful Spoilers – Quinn Forrester Goes Insane?

The Bold and the Beautiful spoilers reveal that Quinn will already be heartbroken over Carter marrying Paris. Then to find out that she lost Carter because Donna was sleeping with Eric will be too much. Quinn could completely lose her marbles. Fans remember “Crazy Quinn” and it’s likely we will see that again.

Quinn could get into a catfight with Donna. Perhaps Quinn will try to strangle Donna with her bare hands. However, what would be completely over the top is if Donna mysteriously went missing.

Remember, Justin Barber (Aaron D. Spears) kept Thomas Forrester (Matthew Atkinson) in a cage during Vincent “Vinny” Walker’s (formerly played by Joe LoCicero) murder mystery. What if Quinn kidnaps Donna and holds her in that same cage? Is it possible that Quinn goes that crazy?

If Donna goes missing, will Eric suspect Quinn is responsible, or assume she reconsidered the affair? Share your thoughts on how Quinn will react when she finds out about Donna. Remember to keep watching the CBS soap to see what happens next.