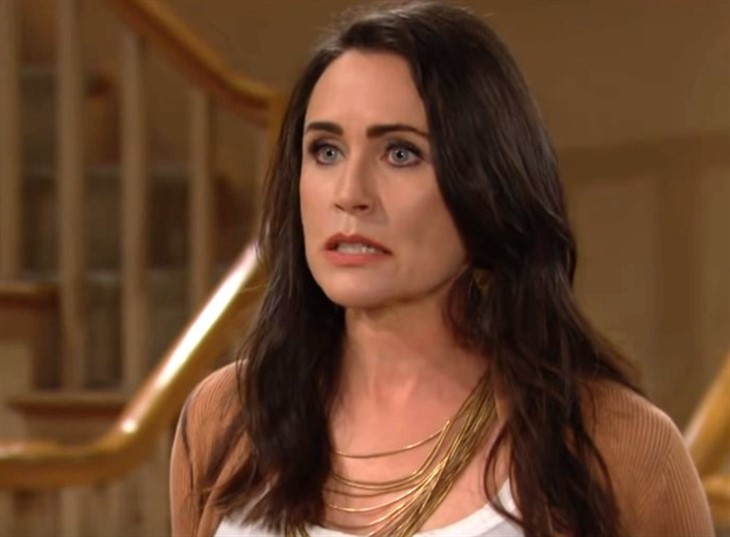 The Bold and the Beautiful (B&B) spoilers document that Quinn Fuller (Rena Sofer) is teased to see evidence of her husband’s reconnection with the woman she banned from Forrester Creations. That sets the daytime stage for a flashpoint decision that must be made by Quinn and Eric Forrester (John McCook).

A double standard has been in play since Eric basically gave Quinn and Carter slaps on their wrists. McCook’s character also agreed to cut Donna off, even though they had done nothing wrong at that point in the plot.

Any anti-Quinn fans can not honestly assert that Eric was right to keep his ED diagnosis from his wife. She deserved to know about that serious issue because it impacted her husband physically and mentally.

By keeping Quinn in the dark, Eric was not being honest. His reluctance to be near her during that time naturally made Quinn question whether Eric had fallen out of love. That is why she had doubts about herself and began talking with Carter.

Eric is directly responsible for Quinn’s confusion. However, she has free will and made the mistake of crossing a moral line with Carter.

As fans recall, Quinn responded with immediate compassion when she finally learned about Eric’s medical condition. Her reaction was fully genuine. It reinforced that Quinn’s love for Eric was deep.

The loyalty Quinn displayed after that reveal confirmed that she was committed to Eric. While she had developed feelings for Carter, she stood firm in ending their romantic connection.

Quinn has repeatedly referenced Eric’s fidelity to their marriage when speaking with Carter in recent months. Of course, she did not know that her husband had not resolved all that happened and was possibly using Donna as an ego-booster.

The Bold And The Beautiful Spoilers – Does Eric Forrester Love Donna Logan More?

This subject header reflects a potentially decisive question. It appears as though Eric does not know if he loves Donna more than Quinn.

It could be that Eric has been using Donna because of her undying loyalty to him. Gareis’ character clearly loves Eric more than any man and considers him her soul mate.

Even though Eric was living by a double standard earlier in this story line, he is the person who is in the wrong now. Quinn is the betrayed party in this marriage, with a likely resolution ahead this summer on B&B.

Days Of Our Lives Spoilers: Shawn And Jan Kiss, Is It Romance Or Revenge?