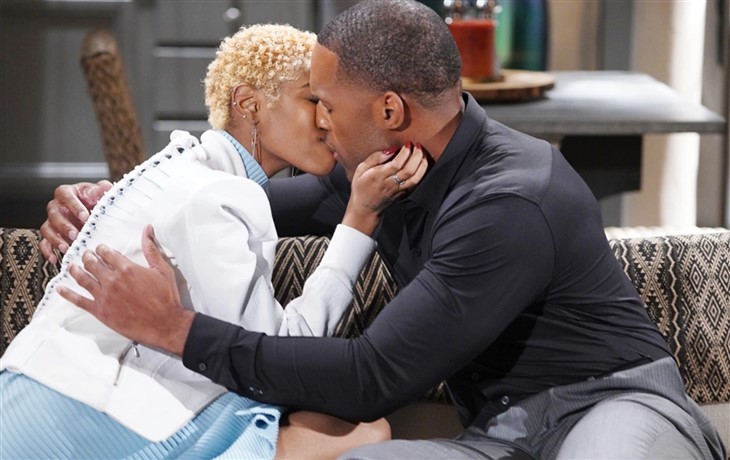 The Bold and the Beautiful (B&B) spoilers reveal Carter Walton taking a big step as he continues to nurse that big broken heart caused by Quinn.

The Bold And The Beautiful Spoilers- To Paris On The Rebound

Paris Buckingham (Diamond White) does not know how to take no for an answer, but Carter Walton (Lawrence Saint-Victor) does. Quinn Fuller (Rena Sofer) rejected him once again as she tries to remain firmly committed to Eric Forrester (John McCook) and since Carter is one lonely man, he is about to make a major mistake.

Spoilers say that Carter will give in and ask Paris to marry him. This would be the second Buckingham sister he’s been engaged to in a little over a year, but who is counting except for their mother, Grace Buckingham (Cassandra Creech)? Paris will throw herself into this cause it’s like a dream come true for her. Sure, Zende Forrester (Delon DeMetz) was nice and all but how can she resist a man like Carter. Quinn must be a fool, right? Well, yes, for now, and in more ways than one.

Of course, Quinn is bound to find out that her loyalty to Eric is not returned. Eric has rarely ever been able to stay loyal to a woman, so why would she think she’d be the first, especially after Quinn betrayed Eric with Carter last year. Eric doesn’t seem to care about her feelings at all as he sneaks off to ‘pickle ball’ in the afternoons and does the deed with Donna Logan (Jennifer Gareis) in the bed he shares with Quinn.

With that ring that acts as a heart rate monitor set to tell Quinn what is really going on with her husband, she will be desperate to stop Carter from marrying Paris, but she is likely to be too late. What will Carter do once he learns Quinn is free and he is not. Well, he has a Buckingham mother who already hates him for what he did to one daughter (with Quinn); he will need to seriously watch his back if he breaks the heart of another daughter.

While fans can’t wait to see ‘Quarter’ together, it’s Quinn’s belief that Eric is the best man on Earth that will do this pairing in. And when Quinn finds out the truth, Donna better run to another state because the old Quinn is likely to come out to play. Stay tuned to The Bold and the Beautiful weekdays to see how this story plays out.