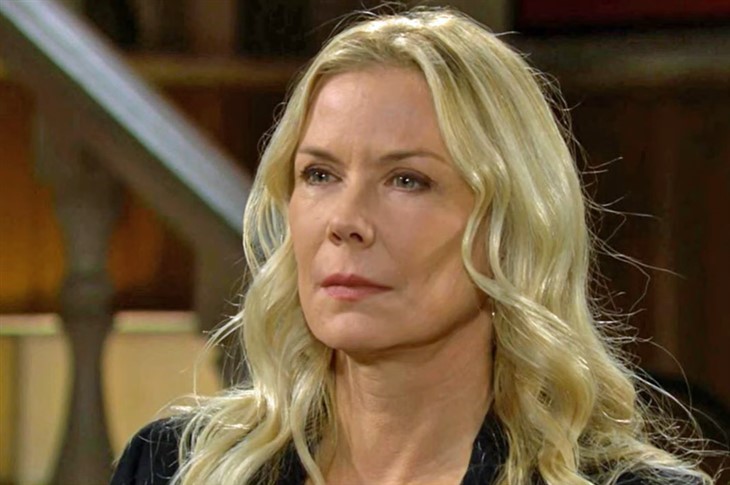 Taylor Hayes (Krista Allen) is Brooke’s renewed competition. But Brooke is also a mother and recognizes and respects the pain Taylor is enduring.

Ridge Forrester (Thorsten Kaye) loves both women but decided that he can not remain on the roller coaster with Logan any longer. However, fans know that a full reveal of the perpetrator of the crimes against Finn and Steffy will dramatically alter Ridge’s perspective of Brooke.

The Bold And The Beautiful Spoilers – Brooke Logan Forrester Was Wronged

Brooke has been hyper-focused on herself since New Year’s Eve. Anti-Brooke fans would suggest that she has been self-involved since the show’s debut in 1987, but that would be a bit much.

Sheila Carter’s (Kimberlin Brown) actions against Brooke, in secretly providing her with alcohol, look like a vengeful high school enemy’s game when compared to the incredible events in the alley behind Il Giardino.

But Sheila’s murder and, for the moment, assault against Steffy, can serve to expose what Brown’s character did to Brooke.

Thomas Forrester (Matthew Atkinson) has not forgotten what he knows about Sheila. Seeing his sister lying in a hospital bed did not change Thomas’s concern about what Sheila recently acknowledged.

As dedicated fans recall, Thomas applied pressure until Brown’s character admitted to what she did to Brooke. The champagne label switch happened because Sheila was threatened by Brooke at Il Giardino in front of Deacon Sharpe (Sean Kanan).

Sheila told Thomas that Brooke said she would protect Finn, Steffy, and Hayes Forrester Finnegan (Samantha Worden and Piper Harriet) from her. So, Sheila neutralized Brooke and then proceeded to kill Finn and put Steffy into an unconscious state.

The Bold And The Beautiful Spoilers – Taylor Hayes Unable To Win?

Taylor believes that she and Ridge are likely to reunite. Ridge’s split from Brooke was not acrimonious but rather one that resulted from emotional exhaustion.

Finn’s tragedy and Steffy’s seeming tough road to recovery fuels Taylor and Ridge’s belief that their renewed bond is strengthening, and it is. However, that one-time couple may not be destined to remarry.

Sheila’s influence has and will continue to impact lives, changing them in unanticipated ways. While it appears as though Taylor is winning, Sheila’s revealed actions will have the powerful potential to reinforce Ridge and Brooke, who are not yet divorced.