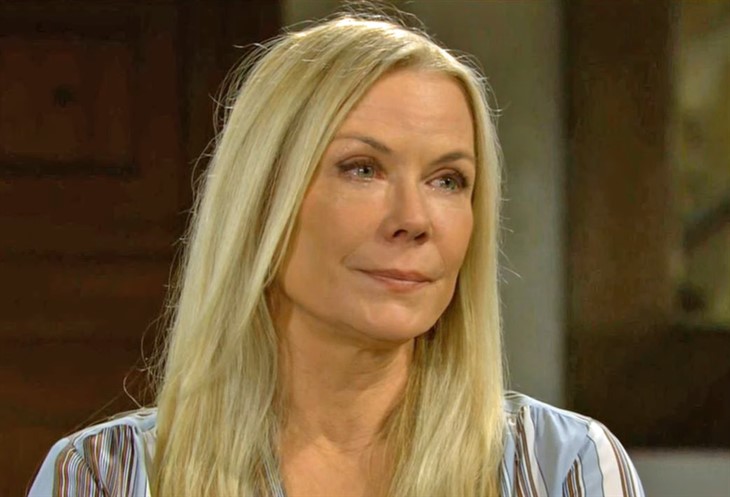 The Bold and the Beautiful (B&B) spoilers document that Brooke Logan Forrester (Katherine Kelly Lang) intended to go to the jail and confront Sheila Carter (Kimberlin Brown). She did that but did not slam the cell door as she was hoping.

To think that the Deputy Chief would allow Brooke access to this particularly violent criminal, in a high-profile case, was a bit of a stretch. However, it was a nod to Brooke, who had been wronged by Sheila months before she shot and killed her own son and then believed she killed her daughter-in-law.

Brooke knows Sheila’s horrid history of violence as well as anyone. So, why would she intentionally provoke her at Il Giordino in late December?

Lang’s character appointed herself as Sheila’s superior officer, telling her that she would block her from being in John Finn Finnegan’s (Tanner Novlan) life. But Brooke is not Finn’s mother or Hayes Forrester Finnegan’s (Samantha Worden and Piper Harriet).

Sheila inexplicably was out of jail during her last stint on B&B. Dedicated viewers know that Brown returned to the cast prior to her recent stint, got into with Quinn Fuller (Rena Sofer), and lost.

Eric Forrester (John McCook) eventually told Sheila that she had to leave the mansion, where he graciously allowed her to stay after suffering an injury.

It appeared as though Sheila did nothing that resulted in a subsequent jail stay after leaving Eric’s home. Whether she left Los Angeles, California, or the state is hard to say. But she is in jail now due to her own foolish confession as the cliff house.

Finn is believed to be dead. Persistent speculation exists about him possibly being alive.

Proof in the form of his body being shown at a memorial service would be the only way to prove that Finn is dead. Although, even that visual evidence could be part of a setup to get Sheila, assuming she would be allowed to be at the ceremony for another soapy reason.

However, if Finn is dead Sheila is likely being written.