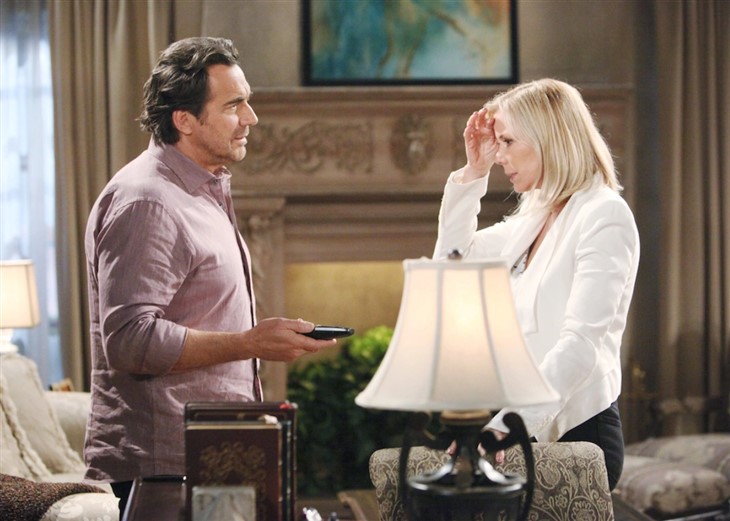 The Bold and the Beautiful spoilers document that Brooke Logan Forrester (Katherine Kelly Lang) was miffed before Ridge Forrester (Thorsten Kaye) told her that he supports his son’s intentions to return to full-time parenting.

Brooke and Ridge appeared to come to a general meeting of the minds about what happened in Monaco. Ridge said kissing Taylor Hayes (Krista Allen) was part of the exuberant atmosphere.

However, the Douglas Forrester (Django Ferri) news set Brooke off. Ridge is trying to see where his wife is coming from. But he stands on the Forrester side of this emerging conflict.

Ridge felt compelled to tell Brooke that he kissed Taylor. That was a smart decision.

Steffy would likely have made sure Brooke learned about the kiss. Thomas Forrester (Matthew Atkinson) might have intentionally divulged that information as well, likely through Hope Spencer (Annika Noelle).

Of course, Taylor would also have been a prime suspect to tell her longtime rival about the kiss. But Ridge circumvented everyone and came clean.

Thomas is hoping that Hope does not fight him. She probably would not choose to do that on her own.

But Liam Spencer (Scott Clifton) is already weighing in on the matter. Deacon Sharpe (Sean Kanan) is also adamant about Douglas staying with Hope.

However, Brooke’s response to Ridge implies that she will forcefully encourage Hope to exercise her adoptive mother’s rights. Brooke will do so in defense of her daughter and as part of a proxy war against the Forresters, meaning Ridge, Taylor, Steffy, and Thomas.

The Bold And The Beautiful Spoilers – Family Battles Can Get Messy

The Bold and the Beautiful spoilers tease Eric Forrester (John McCook) is the one person who has everyone’s respect, including Brooke’s. He has already decided in favor of Thomas’ plan.

If Brooke chooses to play off her unsettled marriage with Ridge, she could coerce Hope to legally fight Thomas. Hope has been Douglas’ authoritative parent figure. Thomas wants to resume that role in his son’s life.

But a judge could rule that Thomas and Hope are equally meaningful parts of Douglas’ life. Ferri’s character is teased to go along with his dad when asked. But Douglas’ feelings could vary as time passes, with a coming need for legal intervention on B&B.