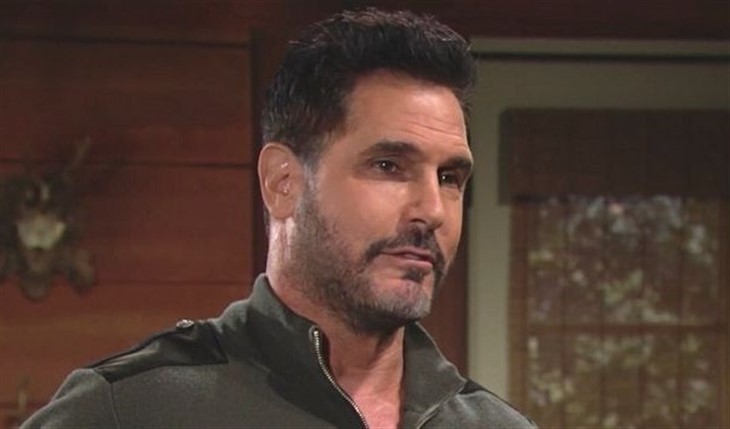 The Bold And The Beautiful (B&B) spoilers indicate that Bill Spencer (Don Diamont) will side with Liam Spencer (Scott Clifton) in the battle for Douglas Forrester (Django Ferri). Liam sees that Thomas Forrester (Matthew Atkinson) is using Douglas to get closer to Hope Spencer (Annika Noelle). Bill isn’t about to let Thomas break up Liam’s family.

The Bold and The Beautiful spoilers reveal that Ridge Forrester (Thorsten Kaye) is all about Thomas bringing Douglas home. Ridge doesn’t see the problem without uprooting him from his home and family because Thomas has decided to be a father. Ridge and Bill were fine when Ridge flew John “Finn” Finnegan (Tanner Novlan) to Monaco. Now Ridge is back to his old self and dead set against Bill.

Ridge didn’t like seeing Bill with Brooke Logan (Katherine Kelly Lang). However, Brooke and Bill were just talking, nothing more. Ridge is most likely going to see Bill siding with Liam as siding with Brooke as well. Ridge hates Bill for being with Brooke even though he is constantly hanging out with Taylor Hayes (Krista Allen). At best, Ridge is a hypocrite but he’s so much more. Ridge’s double standards are beyond ridiculous.

Bill does not believe that Ridge deserves to be with Brooke. Brooke has made mistakes but who hasn’t? It’s not like Ridge is Mr. Squeaky Clean either. However, Ridge is hanging out with Taylor constantly after Bill brought John “Finn” Finnegan (Tanner Novlan) home. The way the Forresters are acting Bill probably wishes he has thought better of that.

Bill believes that Ridge should have more respect for his wife and his marriage. Ridge doesn’t want Brook around any of her exes, yet Ridge practically lived with Taylor at Steffy’s cliff house. Ridge’s grown children are trying to break up his marriage. Should Ridge maybe practice what he preaches?

The Bold And The Beautiful – Who Will Ridge Choose

It looks like Ridge will eventually be forced to make a final decision between Taylor and Brooke while in Aspen. Something is going to force Ridge’s hand so who will he choose? Some suggest that Brooke’s health may be an issue. Has Brooke’s missed appointment led to something very serious? Could Brooke’s life be in jeopardy?

Bill would certainly be on hand to pick up the pieces if Ridge breaks up with Brooke. Will Brooke and Bill reunite after all this time? Has Ridge blown his marriage to figure out he doesn’t want Taylor after all?