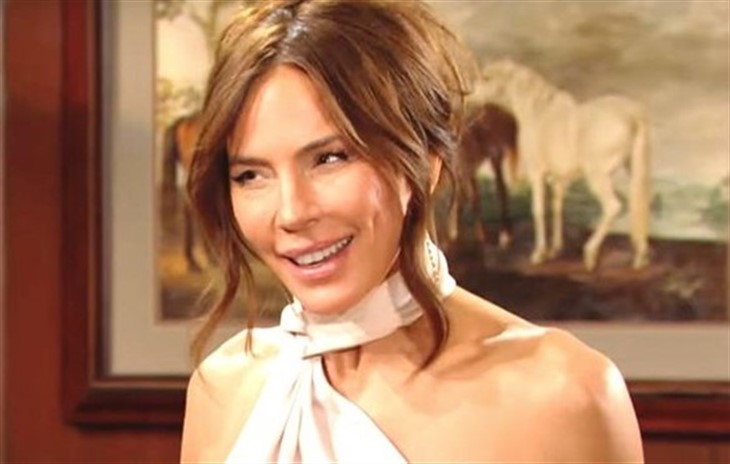 The Bold and the Beautiful (B&B) spoilers document that Taylor Hayes (Krista Allen) wants to believe in love like her daughter is encouraging her to do. Steffy Forrester Finnegan (Jacqueline MacInnes Wood) recognizes the noticeable change in her father’s demeanor when he is around her mom.

Brooke has it in her head that Thomas Forrester (Matthew Atkinson) was endangering his son because he was using a pocketknife to cut an apple. Of course, Thomas did point the shiny implement at Brooke when warning her to stay out of his life. So, Brooke took that opening and exploited it.

In this instance of Brooke-inspired drama, she believes that Thomas keeping Douglas at the Forrester mansion is a form of kidnapping. Following that logic, Brooke wants people to believe Douglas Forrester (Django Ferri) could have been badly slashed while he was sitting many feet away while Thomas was peeling an apple.

Brooke wants the stern children’s representatives from the government to believe that Thomas was going to stab her to death with the knife as well, playing off his past periods of mental instability.

Brooke should be ashamed of herself for fully inserting her gigantic ego into Thomas and Hope Spencer’s (Annika Noelle) lives. Brooke behaves as though Hope is a child who is being bullied by elementary school-age Thomas.

In Brooke’s mind, she is right about all things Forrester. She is the rightful wife of Ridge, with Taylor being yesterday’s news.

Steffy’s point is glaring, potentially even white hot, as Brooke has now foolishly positioned herself opposite Ridge, who will defend Thomas. And, in this instance, Thomas has done nothing that a reasonable mind would consider wrong except for nuancing Douglas’ extended stay because he wants to make a point.

The Bold And The Beautiful Spoilers – Taylor Hayes’ Stock Is Rising

Taylor has reconnected with Ridge and remains in the running to reconcile with him. All Allen’s character needs is a momentous event to cinch the deal.

Teasers indicate that a trip to Aspen will include Taylor, Ridge, and Brooke. That could happen by November Sweeps, if not before.

The Thomas-related drama will likely not be easily resolved, creating a needless wedge issue between Ridge and Brooke. Kaye’s character will certainly seek Taylor’s advice and counsel in upcoming episodes as this storyline plays on.