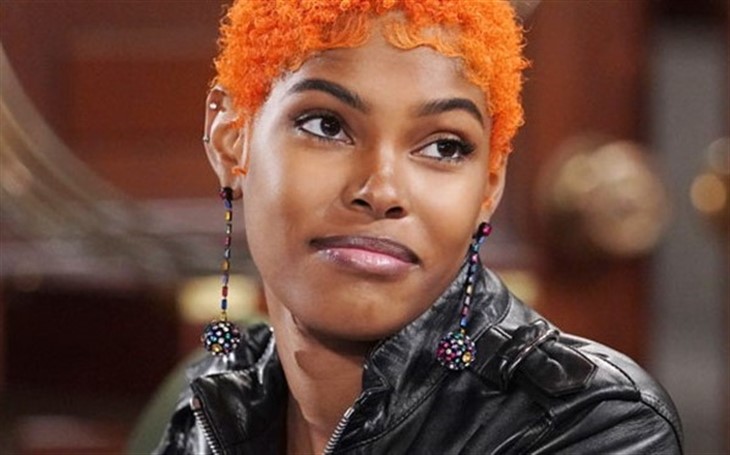 The Bold and the Beautiful (B&B) spoilers and updates tease that Diamond White will be voicing over a new superhero in a new Marvel series titled Moon Girl and Devil Dinosaur. Here’s what you should know about White’s new character, which will be the first black young woman superhero in the Marvel/Disney universe.

The actress, who plays Paris Buckingham in the daytime drama, will play the voice of the main character named Lunella Lafayette. She’s a 13-year-old girl who’s considered one of Marvel’s smartest people.

But she’s not just a genius, she’s also moonlighting as a superhero named Moon Girl. Moon Girl and Devil Dinosaur, her 10-ton T-Rex work together to protect the people of the Lower East Side community.

The Marvel series is executive produced by Laurence Fishburne, who’ll also voice over The Beyonder. Devil Dinosaur will be voiced by Fred Tatascoire while Libe Barer will voice over Casey.

Marvel Entertainment took to social media to share photos of the new series. The tweet said, “It’s time for a reveal! Say hello to the characters of Marvel’s Moon Girl and Devil Dinosaur. Who else is excited about the new series?”

White got excited when she saw the tweet. “I’m FULLY FULLY FULLH NOT OK AHH,” she wrote.

“My first time seeing this and I’m having a breakdown!” she added.

Ridge Forrester (Thorsten Kaye) will accidentally reveal that Brooke Forrester’s (Katherine Kelly Lang) had a relapse on New Year’s Eve. He will assume that it’s what Taylor Hayes (Krista Allen) is trying to spill. So, he’ll want to say it first. He’ll acknowledge Brooke’s sobriety setback and say that they’re working on it together.

Taylor will then admit that she had no clue about Brooke’s relapse. But she has something else to reveal. She’ll tell everyone that Brooke cheated with Deacon Sharpe (Sean Kanan).

The revelation will eventually lead to a faceoff between Brooke and Steffy Forrester (Jacqueline MacInnes Wood). The latter will insist that Ridge is better left off with Taylor.

Brooke will panic when she realizes that her secret is starting to spread. She’ll worry that Ridge will learn about it from Taylor instead of her. As for Sheila Carter (Kimberlin Brown), she’ll push Deacon to spill the beans. The latter will eventually admit that he had a drunken kiss with Brooke.

GH Spoilers: Did Victor Set A Trap For Peter On The Ship He Sent?