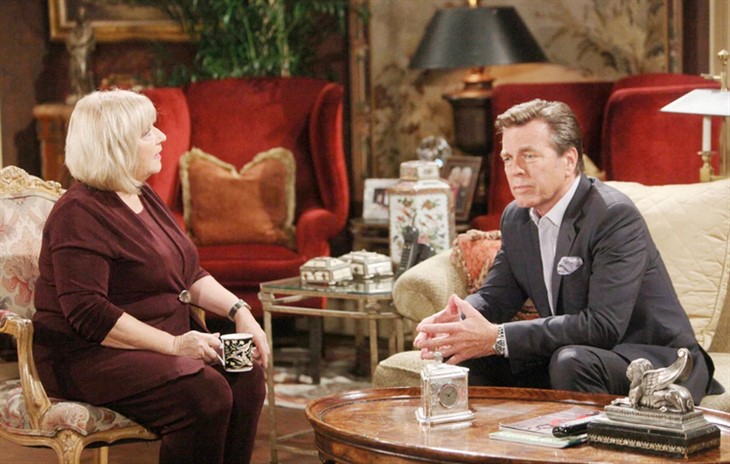 The Young and the Restless (Y&R) spoilers and updates tease Traci Abbott (Beth Maitland) wants the best for her family at Christmas time. Traci is a writer who wants a story to have a good ending. Traci has been working on her different literary pursuits.

According to Y&R updates, Traci has been concerned about her family because they have been having different problems. Traci wants to bring her family together at Christmas time to help them.

Traci has been concerned about her brother Jack Abbott (Peter Bergman) and has wanted Jack to find someone to give his heart to. Jack has not been in a relationship since he was with Sally Spectra (Courtney Hope). Jack could not forgive Sally for conspiring with Tara Locke (Elizabeth Leiner) against his son Kyle Abbott (Michael Mealor) and his wife Summer Newman Abbott (Hunter King).

According to Y&R spoilers, Jack has been trying to figure out his feelings for Phyllis Summers (Michelle Stafford). Jack wants to have Phyllis in his life but is trying to stay friends with her. Jack does not want to lose Phyllis as a friend. Traci may decide that to invite Phyllis to come to the Abbott family Christmas. Traci may want to try to get Jack and Phyllis together.

Traci knows that her brother Billy Abbott (Jason Thompson) has been having trouble with his professional life. Billy has been locked in a battle with Adam Newman (Mark Grossman) and Victor Newman (Eric Braeden) over his company Chance Comm. Billy and Lily Winters (Christel Khalil) have been trying to find a way to keep Adam and Victor form taking over Chance Comm to make it a part of their company Newman Media.

Billy has been facing trouble from Victoria Newman Locke (Amelia Heinle) and her husband Ashland Locke (Richard Burgi) who wants to take over Chance Comm to make it a part of their newly created company Newman Locke. Traci may want Billy to forget his professional troubles and spend time with the family. She may believe that it would be good for him.

Traci knows that her sister Ashley Abbott (Eileen Davidson) has been trying to help her daughter Abby Newman (Melissa Ordway). Abby has been trying to find a way to help her husband Chance Chancellor (Conner Floyd) to get his life back on track. Chance had gone on a dangerous mission to bring a criminal organization to justice. Chance had a team of fellow agents who did not survive the mission.

Ashley was able to help Abby to find Chance and bring him safely back to Genoa City. Ashley hopes that Abby and Chance can find a way to move forward together. Traci may get Ashley to bring Abby and Chance to the Abbott Christmas to help to them to put their concerns aside for the holidays.

The Young and the Restless spoilers indicate Traci wants her family to find joy in their lives. Traci wants Jack to find love again. She may believe that Phyllis is the one who could make Jack happy. Will Traci try to bring Jack and Phyllis together? Traci wants Billy to find a way to get his professional life in order. Can Traci help Billy to decide what he needs to do in order to find a way to save Chance Comm?

Traci wants to help Ashley with Chance and Abby. Can Traci help Ashley to support Chance and Abby to embrace their new life together? Be sure to catch up on everything happening with Y&R right now. Come back here often for The Young and the Restless spoilers, news, and updates.