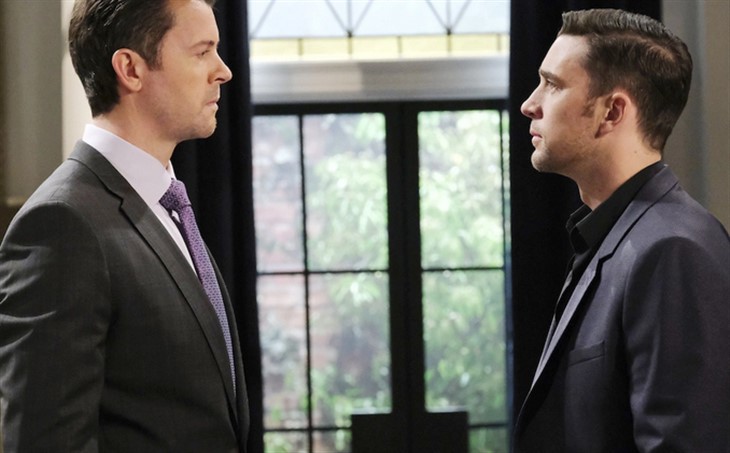 Days of Our Lives spoilers for the week of December 27 reveal that Chad DiMera (Billy Flynn) discovers the truth. That same week, EJ DiMera (Dan Feuerriegel) is arrested for Sami DiMera’s (Alison Sweeney) kidnapping. Even though the two are brothers, Chad is infuriated with EJ and is only getting more frustrated. So, if he learns that EJ is innocent, will he do the right thing?

DOOL spoilers reveal that Lucas Horton (Bryan Dattilo) and Philip Kiriakis (Jay Kenneth Johnson) confessed to each other. While Lucas discovered his brother was alive and framing Brady Black (Eric Martsolf), Philip learned that Lucas kidnapped Sami. As Christmas approaches, Lucas’ situation will continue to spiral out of control.

Just as Sami gets her Christmas wish and reconciles with EJ, they won’t be able to spend the holiday together. EJ is arrested and charged with kidnapping Sami. Despite his innocence, the police must have some evidence that links him to the crime. Lucas is a desperate man who keeps doing desperate things. Once Sami reports the kidnapping to the police, an investigation will begin.

Lucas doesn’t want to go to prison for being responsible, but also wants EJ out of the way so he can be with Sami. So, Lucas probably frames EJ for the crime. The tactic seems to work since EJ spends Christmas in jail while Sami turns to Lucas.

Days of Our Lives spoilers for the week of December 27 reveal that Chad will find out the truth. Chad’s discovery might be that his brother is innocent. This will put Chad in a difficult position as he is currently at war with EJ. Despite the two being family, there is a power struggle and some painful history between the two men.

It is speculated that Chad will face a moral dilemma about what to do. If the circumstances were different, it would be easy for Chad to go to the police with what he knows and free EJ. However, a lot has happened and EJ just keeps pushing all of Chad’s buttons. Chad knows that it would be easy to just sit back and do nothing.

However, he is not that type of man. Although he’s done dirty deeds in the past, Chad is a decent man. If Chad does decide to clear EJ’s name, will that improve their relationship? Will it finally put an end to their rivalry? We will have to keep watching to find out what happens with this storyline.