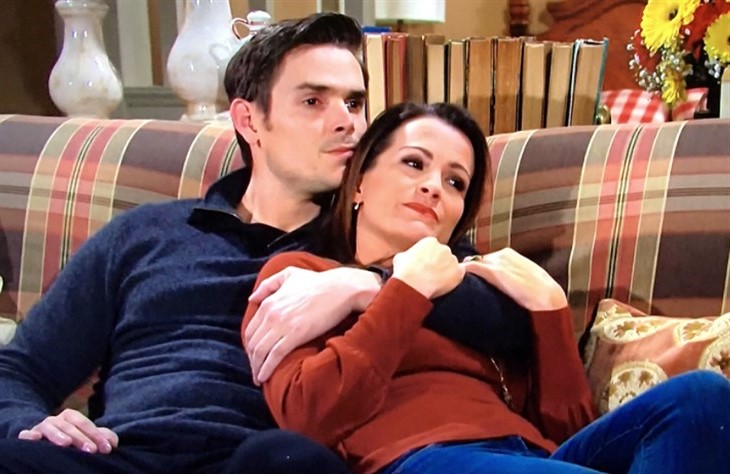 The Young and the Restless (Y&R) spoilers for Thursday, December 30, 2021, reveal Chelsea Lawson going for broke when it comes to her feelings for Adam Newman.

Since Chelsea (Melissa Claire Egan) has been back in Genoa City, she has danced around one major subject with Adam Newman (Mark Grossman). Even when she was with her mother and they only communicated via Zoom, Chelsea didn’t want to tell Connor (Judah Mackey) she and Adam had broken up because she still had hope that they could get back together. After all, last New Year’s Eve, she and Adam had planned to start a new life with Connor elsewhere until that pesky brain injury ruined everything.

Adam has made it clear that they are best off as friends and that they need to move on, but that didn’t stop him from setting Chelsea up with a job and giving her his penthouse to live in.

Well, it’s New Year’s Eve once again and Chelsea knows what she wants — or rather who she wants — so she goes for broke and tells Adam. The problem is Adam is torn and is not sure he ever wants to be with Chelsea again — especially with Sally Spectra (Courtney Hope) kinda-sorta in his life.

Y&R Spoilers – A Fresh Start For The New Year

It’s been quite a year for Elena Dawson (Brytni Sarpy) as she had to face the fact that her relationship with Devon Hamilton (Bryton James) was never going to recover from her sleeping with his cousin, Nate Hastings (Sean Dominic). She then decided to pursue a relationship with Nate, but that might not have gone the way she wanted, nor has her career. Now, Elena is at a crossroads in her life and has to make a decision.

It’s also been an eventful year for Kevin (Greg Rikaart) and Chloe Fisher (Elizabeth Hendrickson). They became parents again, started new careers, and even had to beat the law a few times. Now, they make a promise for what is to come in 2022. What kind of mischief will they get into — or at least promise not to get into? Stay tuned to The Young and the Restless weekdays to see how these stories play out.

Days Of Our Lives Spoilers: Shocking Discoveries To End The Salem Year