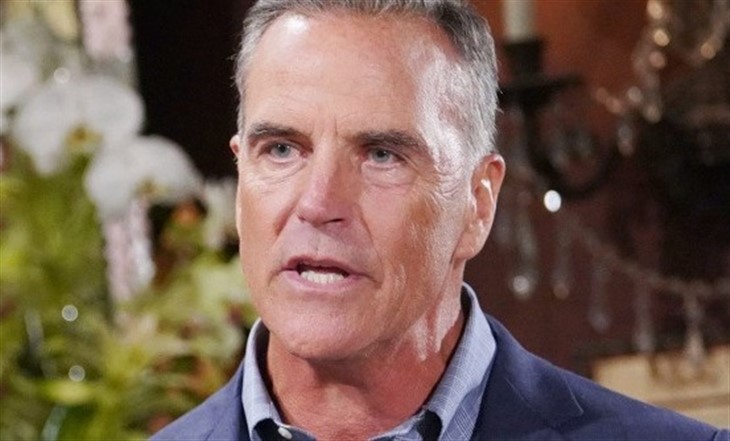 The Young and the Restless (Y&R) spoilers for the next two weeks tease that Nikki Newman (Melody Thomas Scott) comes for Sally Spectra (Courtney Hope) while her hubs Victor Newman (Eric Braeden) discovers dish on his soon to be SIL Ashland Locke (Richard Burgi). And just what is Chelsea Lawson (Melissa Claire Egan) cooking up this time?

Ashland is busy dying and marrying all at the same time. Victoria Newman (Amelia Heinle) is the apple dumpling of his eye but some fans suspect he’s playing her for a fool. If this is the case, he better steer clear of her daddy Victor who will soon get a bit of intel about Ashland.

The Young and the Restless spoilers show Victor has reason to be cautious and he will take a deep dive into Ashland’s life. Ashland tangles with  Jack Abbott (Peter Bergman) as well perhaps in regard to tot Harrison Locke (Kellen Enriquez).

Look for Chelsea to ask baby daddy Adam Newman (Mark Grossman) to attend one of their son Connor Newman’s (Judah Mackey) games together. When he says yes she goes overboard creating all kinds of fantastic family scenarios in her mind. Uh oh, what could wrong?

There’s a reunion between Mariah and Tessa Porter (Cait Fairbanks), but is it real or Memorex?

The Young And The Restless Spoilers – Devon Hamilton Is Living Large

Expect enterprising Devon Hamilton (Bryton James) to ask a favor of PI Denise Tolliver (Telma Hopkins) and she could end up digging up dirt on Ben “Stitch” Rayburn (Sean Carrigan)!

Y&R spoilers – A Skyle Wedding In The Works?

Is a Skyle Wedding in the works? According to The Young and the Restless spoilers, Summer Newman (Hunter King) and Kyle Abbott (Michael Mealor) have a major announcement to make. We know that both actors have departed the show so don’t expect them to come home to Genoa City, Wisconsin but they could live happily ever after a stunning reversal of fortune.