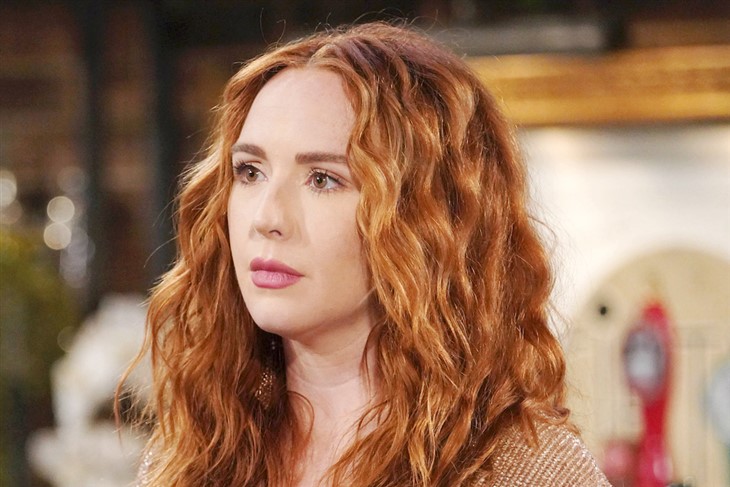 The Young and the Restless (Y&R) spoilers document that Mariah Copeland (Camryn Grimes) feels unsettled, weeks after she gave birth to Bowie. Everyone, including Mariah, knows that the actual name of Chabs baby is Dominic Newman Abbott Chancellor (no baby actor known to be cast for this role, with a doll appearing to be used instead). That underscores Mariah’s fragile mental state.

The length and solitary condition of Mariah’s captivity caused damage that appears to at least include a form of post-traumatic stress disorder. So, mental health treatment should have already been obtained.

Young And The Restless Spoilers – Sharon Rosales Should Be Insisting

Sharon Rosales (Sharon Case) has dealt with mental health issues in her life. She was diagnosed as bipolar and continues to keep the condition in check.

Mariah’s mother is a licensed therapist. So, it is natural to assume that Sharon would be most attuned to Mariah’s need to talk with a professional who could offer a diagnosis.

It could be that Mariah needs therapy sessions. She may also need some prescription medication. But allowing her to handle the intense stress she endured without any professional assistance is arguably negligent.

Abby looks increasingly fearful of Mariah’s contact with Dominic. Abby has endured a lot, especially Chance Chancellor’s (as last played by Donny Boaz) continued absence. So, she should realize that Mariah needs support. But there are mitigating factors.

Cutting Mariah off from Dominic while simultaneously allowing his biological father, Devon Hamilton (Bryton James), to be increasingly involved in his life is not a cruel choice on Abby’s part. She is uncertain how to handle Mariah’s erratic behavior.

Similar to Sharon and Tessa Porter (Cait Fairbanks), Abby recognizes that Mariah is struggling. But she has not been able to help her to date.

It feels as though Mariah is heading toward a breaking point. However, that does not necessarily mean a nervous breakdown.

Mariah can resolve her problems if her loved ones continue to stay close to her. But if she goes off-course, then an unapproved reunion with Dominic is something viewers can anticipate.

GH Spoilers: Esme Walks Out On A Broke Spencer?