Y&R Spoilers: Jack Refuses To Be There For Phyllis 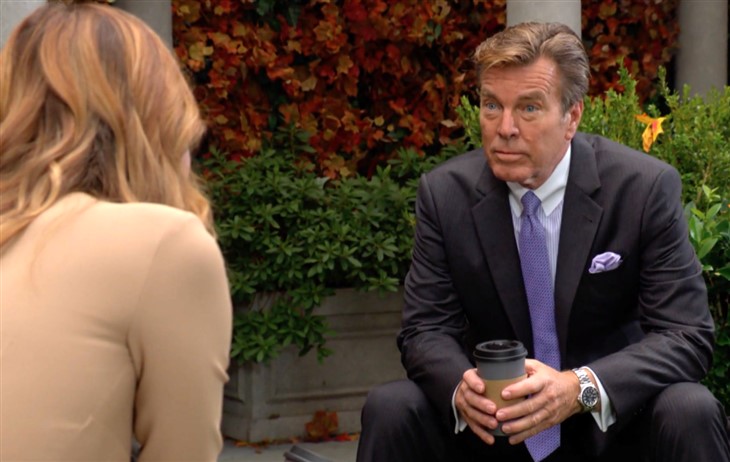 The Young and the Restless spoilers for Tuesday, November 9, 2021, reveal Phyllis Summers needing someone to turn to and not finding comfort where she expects it.

The Young And The Restless Spoilers: What Is Jack Up To Now?

For months, Jack Abbott (Peter Bergman) has been pining after Phyllis (Michelle Stafford), the ex-wife he let get away when she had a steamy affair with his little brother, Billy Boy Abbott (Jason Thompson). After thinking he could have a relationship with Sally Spectra, he realized what he was really looking for was another Phyllis and told her so. The problem was, she was with Nick Newman (Joshua Morrow) at the time. Heck, Jack even told Nick he was still in love with Phyllis.

Well, now Nick and Phyllis are broken up and Phyllis needs a friend. While Nick has had no problems pouring his heart out to ex-wife, Sharon (Sharon Case), Phyllis does not have Jack anymore as he’s now trying to avoid her. Maybe he doesn’t want to be the rebound guy.

Maybe he wants Phyllis to come to him and not just complain about her breakup with Nick. Either way, Phyllis is surprised, but how long will it be until Jack finally caves? Is Phack going to happen next or will Jack and Phyllis remain alone for the foreseeable future?

Y&R Spoilers – The Great Victor Newman Won’t Back Down

Jack may be in retreat when it comes to Phyllis, but Victor Newman (Eric Braeden) is never in retreat, especially when it comes to Billy, someone Victor has despised for years, especially after all the hurt he caused Victoria. After he tried to sabotage Victoria’s (Amelia Heinle) to Ashland Locke (Richard Burgi)wedding and not mind his own business, Victor became angrier than ever and now he wants ChanceCom.

He knows if he takes Billy’s company, he will hit him where it hurts. But taking Billy’s woman away from that company will hurt even more. That’s why Lily Winters (Christel Khalil) gets an offer she just can’t refuse. Well, at least Adam Newman (Mark Grossman) and Victor hope she can’t refuse it. Is she really that dedicated to Billy? Stay tuned to the Young and the Restless weekdays to see how these stories play out.