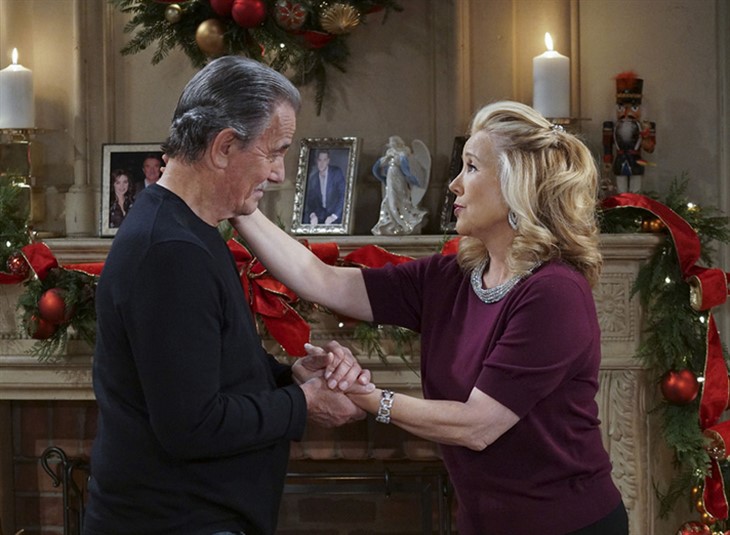 The Young and the Restless (Y&R) spoilers for Thursday, December 23, 2021, reveal Christmas beginning in Genoa City with some of your favorite characters — before things start to get weird on Friday.

The show’s premiere couple who have managed to stay together for several years now share romantic Christmas moments as Victor (Eric Braeden) and Nikki Newman (Melody Thomas Scott) start to ring in the holidays with some time alone before family arrives. It might not sound like an exciting Christmas, but sometimes those tender times are needed on a soap as much as those tense times and when it’s the Newmans, you just know Victor will call Nikki “My baby” and she will melt in his arms.

Of course, drama can’t be far behind as their children never seem to be without it. Victoria (Amelia Heinle) is at least happily married for the moment, but also ready to rapidly age her kids by sending them to boarding school.

Will we get a last glimpse of the small Katie and Johnny Abbott before they leave? Will Adam Newman (Mark Grossman) stick around with Connor or end up with Chelsea Lawson (Melissa Claire Egan) once again? And then there’s Nick Newman (Joshua Morrow), who is at a crossroads in life and ready to take viewers on a magical journey. We all know what that means! A standalone episode is coming right up…

Billy Boy Abbott (Jason Thompson) has been having fun playing an old version of himself where he falls down drunk, gambles, and turns his life into a shambles and Adam and Victor are having fun watching it all happen in front of them. Little do they know that Billy is faking this downfall in an effort to have them let their guard down so he can reclaim ChanceComm.

But Adam and Victor are busy and not around, so Billy can stop the act and enjoy some time with Lily Winters (Christel Khalil). It’s been a long year for these two both personally and professionally, but Lily has remained by Billy’s side no matter how much he has screwed up, which is a change for him. Most women usually give up on him by now but not Lily.

Maybe that’s why he has so much confidence to go after Adam and Victor and finally prove himself a worthy adversary. Stay tuned to The Young and the Restless weekdays to see how these stories play out.

Days Of Our Lives Spoilers: MarDevil Is Ready To Completely Destroy Salem’s Christmas

GH Spoilers: Victor Visits Peter, Does He Fame Someone For Murder?