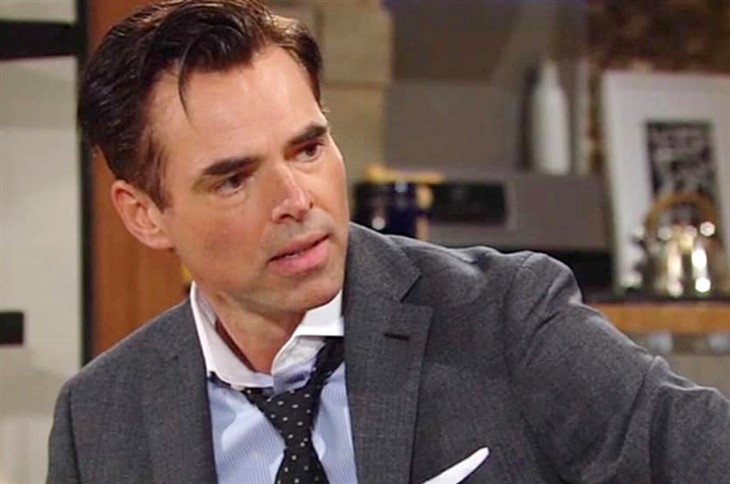 The Young and the Restless (Y&R) spoilers reveal that Billy Abbott (Jason Thompson) rejected Lily Winters’ (Christel Khalil) advice. Billy refuses to tell Jack Abbott (Peter Bergman) about his act… even if it could threaten the patriarch’s own sobriety. At some point, Billy will have to confess the truth to everyone, but he might not be believed. His act is just too convincing.

The Young And The Restless – Lily Winters’ Plea

Y&R spoilers reveal that Billy has been pretending to get drunk when he’s actually sipping club soda or apple juice. Stepping it up a notch, Billy is now carrying cards around with him. Even though Lily played along, it was clear that she didn’t like it. After Victoria Newman-Locke (Amelia Heinle) left in disgust, Lily told Billy that the act was too convincing. Lily even begged Billy to at least tell Jack what he was doing or he could be tempted by his own addictions. However, Billy refused because he was still pouting over Jack rejecting his offer.

During the week of December 20, Billy will finally confess the truth to Jack. However, something must happen in order to make that happen. Could Billy’s act be so convincing and painful that it sends Jack back to his old demons? Is that what finally convinces Billy to tell Jack the truth about his fake downfall? It certainly seems like it, but there is a good chance that Jack won’t believe him. Who in their right mind would fake a relapse, especially when they have children they could risk losing custody of?

The Young And The Restless – Downfall Act Too Convincing?

The Young and the Restless spoilers reveal that Billy called the kids boarding school to make sure they are shielded from any media reports about him. So, that is a sign that this is going to get pretty nasty. Billy is allowing Sally Spectra (Courtney Hope) to video his fake downfall. This does get back to Adam Newman (Mark Grossman), but it could also go viral. That would put Lily’s new job title and her reputation on the line unless she breaks it off.

Victoria can always tell when Billy is lying or not, but even she is convinced that he is drinking again. The kids might not just be going to boarding school… Victoria could strip him of visitation in order to protect the children.

Y&R Spoilers – Loses It All?

Actor Jason Thompson told Soap Opera Digest that not every plan is a good one when talking about this storyline. So, it sounds like the actor was teasing that this downfall scheme will backfire. What will the consequences be and is there any possibility of Billy getting back what he’s lost?

Be sure to catch up on everything happening with Y&R right now. Come back often for THe Young and the Restless spoilers, news and updates.