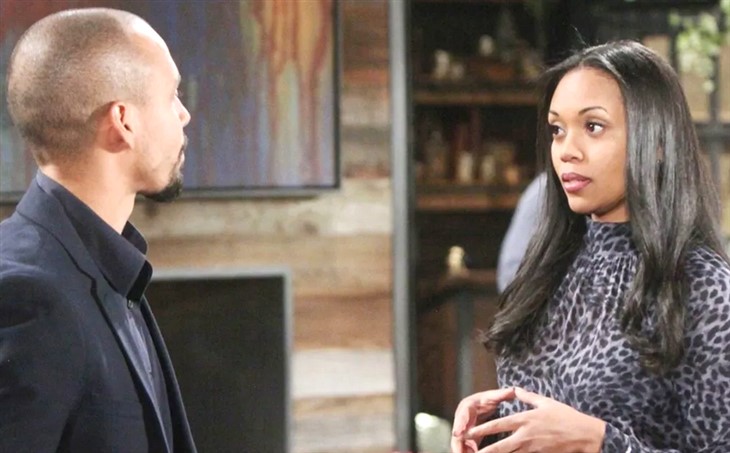 The Young and the Restless (Y&R) spoilers and updates tease Devon Hamilton (Bryton James) wants to help others with their problems. Devon helped Abby Newman (Melissa Ordway) to realize her dream of becoming a mother. Devon offered to be the donor and Mariah Copeland (Camryn Grimes) was the surrogate that carried Abby’s son Dominic Phillip Newman-Abbott-Chancellor (no actor’s name known for this important role).

Devon has wanted Abby to get her husband Chance Chancellor (Donny Boaz) back home. Devon has been concerned about his girlfriend Amanda Sinclair (Mishael Morgan). Amanda has been working to bring Sutton Ames (Jack Landron) to justice for killing her father Richard Nealon (no actor’s name known for this retrospective role). Devon has wanted to help Abby and Amanda with their problems.

Devon has been helping Abby to take care of Dominic. Devon wanted to keep his distance because he believed that Chance would come back to be Dominic’s father. Abby has received the devastating news that Chance has been killed while he was on an undercover assignment. Devon has been getting closer to Dominic and has started to want to be considered Dominic legal father.

Amanda has wanted to get justice for Richard. She never got a chance to get to know her father. Amanda has been concerned about the toll the case against Sutton has had on her mother Naya Benedict (Ptosha Storey) who is having trouble with her health. Amanda hopes to open a law firm with her sister Imani Benedict (Leigh-Ann Rose). Amanda wants Sutton to be found guilty of Richard’s murder. She knows that Sutton may not be brought to justice. Amanda could bring a lawsuit against Sutton if he is not convicted. Amanda will need to decide if she should put Naya and Imani through more legal trouble over Richard’s death.

The Young and the Restless Spoilers: Devon Hamilton and Amanda Sinclair Face a Hard Road Ahead

The Young and the Restless Devon will want to help Abby to find a way to pick up the pieces. Abby will need help with Dominic and to overcome the loss of Chance. Can Devon help give Abby the support that she needs to face her and Dominic’s future without Chance? Amanda will have to find a way to get past her loss of her father Richard. Amanda will need to find a way to help her family to heal from the problems of their past.

Can Amanda find a way to move forward with Naya and Imani to be better future? Devon wants to be with Amanda but is being pulled toward Abby. Will Devon and Amanda be able to stay together as they deal with their different challenges? Be sure to catch up on everything happening with Y&R right now. Come back here often for The Young and the Restless spoilers, news, and updates.