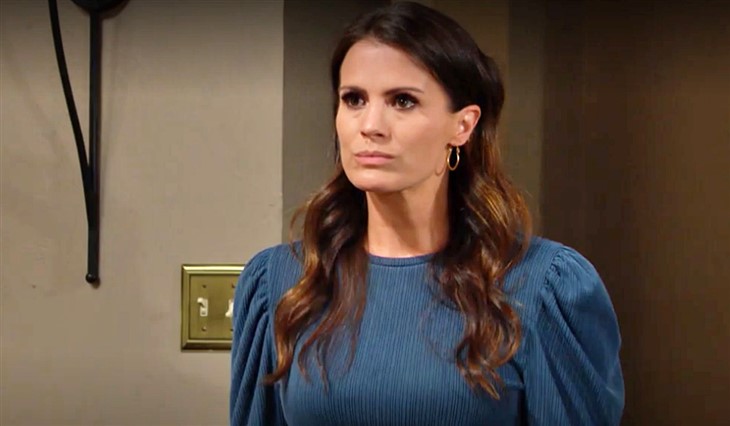 The Young and the Restless spoilers reveal that Chelsea Lawson (Melissa Claire Egan) talks to Adam Newman (Mark Grossman) about their son. First, she invites Adam to join her in watching the next game. Then, she starts making all these grand plans for their future together as a family. Is she sincere or is this just another way to manipulate Adam?

The Young And The Restless Spoilers – Lacrosse Camp Acceptance

Y&R spoilers reveal that Chelsea was against the idea of Connor Newman (Judah Mackey) going to Minnesota for lacrosse camp. Eventually, she realized that Adam’s decision about the camp was not about her. It was about Connor, who would have a better time at the camp. Now that she knows what a great time Connor is having, she’s glad that he went.

While talking to Adam, Chelsea mentions the idea of them attending one of Connor’s games together. When Adam seems to be considering it, Chelsea sees the green light and floors it. She suddenly starts coming up with all these ideas that they could do together as a family.

The Young And The Restless Spoilers – Chelsea Lawson’s Family Plan

The Young and the Restless spoilers reveal that Adam has told others that his relationship with Chelsea is over. Too much has happened and there is no going back. However, he knows that they need to co-parent Connor together, so he is hoping they can be civil. As for Chelsea, she wanted revenge on Adam.

All of a sudden, she is coming up with these ideas that all three of them could participate in as a family. However, Adam slams the brakes and tells her to slow down.

Egan spoke to Soap Opera Digest about the storyline and couldn’t say if Chelsea is sincere or if this is another scheme. She did explain where the family plans came from but also knows that you just never know with the character.

“She’s been working on her feelings while she’s been away but she’s getting a little ahead of herself. She’s wanting them to look like a family again, whatever that may be, but she gets carried away… There’s always a question when it comes to her, so it’s easy to wonder, what is she really up to?”

What do you think will happen when Chelsea returns? Will she have a complete turnaround and really want to be a family with Adam and Connor again? Or is this just another manipulation tactic? We will have to keep watching the CBS soap to find out what happens next with this storyline.

DOOL Spoilers: Where We Left Off Before The Olympics