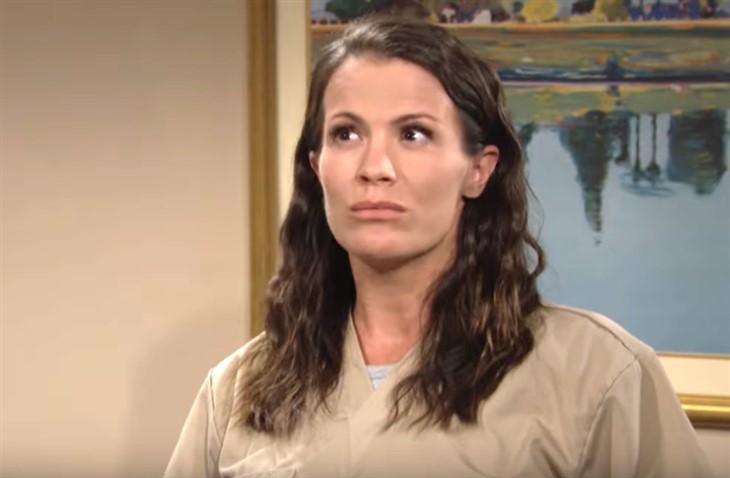 The Young and the Restless (Y&R) spoilers document that Chelsea Lawson (Melissa Claire Egan) may have received her get out of confinement card. Adam Newman’s (Mark Grossman) tell about Anita Lawson’s (Catherine Bach) broken hip may open a daytime door for Chelsea and the actor who portrays her.

Adam told Chelsea that Anita called him after she wasn’t able to reach her. But then he also questioned if this was a setup. That question is fair, considering Chelsea having learned at the foot of a master con artist, meaning her mother.

Soap fans know that Egan and her husband, Matt Katrosar (the goon who Adam hired to kidnap Chelsea and separately, the paramedic who arrived after her stroke), are set to have their baby in August. So, Egan could record scenes well into July and then take maternity leave.

Assuming the above happens, then Chelsea can potentially be seen on-screen into September. Considering the pacing of the current storyline, it’s possible that a major development is about to take place as well.

Victor Newman (Eric Braeden) doesn’t trust Chelsea and he’s right not to. She blames his son for her current state in life.

Adam has made tremendous strides in recent months to reform himself. His outlook has radically shifted, as he no longer strives to do others harm, even including past enemies.

The guilt-driven compassion that Adam has for Chelsea caused him to ask Victor to facilitate her release from the mental health facility. The situation with Anita appears to offer an opportunity for that to happen and for Egan to take maternity leave.

The Young And The Restless Spoilers – Adam Newman Strikes A Balance

Adam doesn’t believe that Chelsea has fully recovered. He’s right, she hasn’t. But she does appear to be getting better.

If Chelsea is allowed to tend to her apparently ailing mother, then Adam wouldn’t be inclined to let their son tag along. However, a balance could be struck.

Maybe Connor Newman (Judah Mackey) could visit the Lawson’s, with Adam accompanying him on the first trip out?

Egan could be filming advanced scenes, which would allow this projected scenario to happen. Chelsea and Anita could be shown from time to time, with Connor also appearing into the fall.

Here’s hoping that Chelsea plays this smart and is truly healing. Connor deserves stability and wants both of his parents to be happy, as do the fans of all involved.

The Bold And The Beautiful (B&B) Spoilers: Ridge Can Never Trust Justin – Making Peace With Bill is Smarter

General Hospital Comings And Goings: A Daytime Legend Is On Set Filming