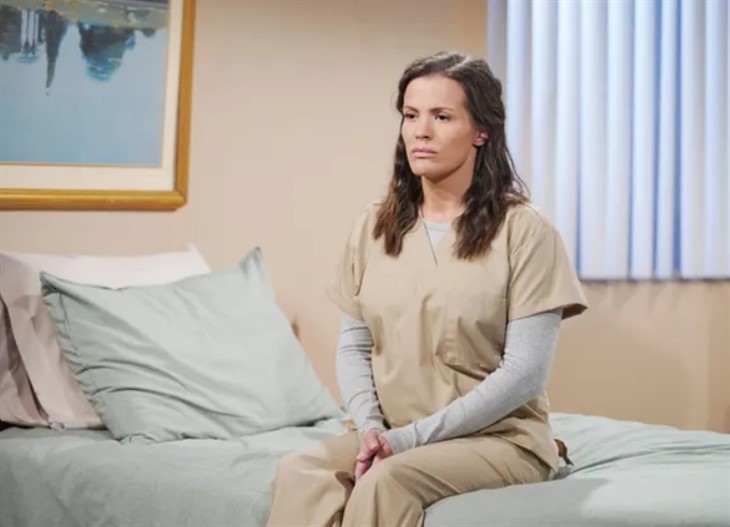 The Young and the Restless (Y&R) spoilers reveal Chelsea Lawson doing anything so she can finally walk free — and getting Chloe involved again.

When Chelsea (Melissa Claire Egan) learns that her doctor is working for Victor (Eric Braeden) and wants to keep her in the mental health facility indefinitely she freaks out and knows she has to do something, so she calls Chloe (Elizabeth Hendrickson) and begs her to come visit. She explains to Chelsea that she has to get out of there and get the goods on her doctor.

So, Chelsea intentionally leaves behind a phone so that Chelsea can confront the doctor while she records everything and gets the proof she needs that he’s working for Victor. She then blackmails him to let her out of there sooner rather than later. Oh, and she also manages to send the recording to Chloe, who then gets it to Adam (Mark Grossman). Chelsea also does her best to get a message to Adam that he needs to meet her at Chancellor Park ASAP. Will Adam actually do it? His life is going in another direction now and that direction is most certainly not with Chelsea Lawson.

Chelsea manages to get the doctor to let her out — supervised — just long enough to visit with Adam and beg him for help. How can he side with Victor when Victor wants to keep her locked up forever? We’re sure she won’t bother telling him she has been faking her insanity all at Victor’s insistence because she really did everything she did in the right frame of mind. That confession would just send her to jail.

The Young And The Restless Spoilers – Does Chloe Mitchell Want To Do This Again?

Needless to say, Chloe is hesitant to help Chelsea again and is surprised she even managed to get to the park. Who wants to bet that Chelsea will convince Chloe to help her escape? After all, how hard will it be to make sure whoever is watching her turns their head for a minute so she can run? That would definitely be a Chelsea thing to do.

Stay tuned to The Young and the Restless weekdays to see how this story plays out.  Keep checking Soap Opera Spy for more Y&R spoilers, news, and updates.

General Hospital: Will Portia Try To Keep Trina Away From Ava?