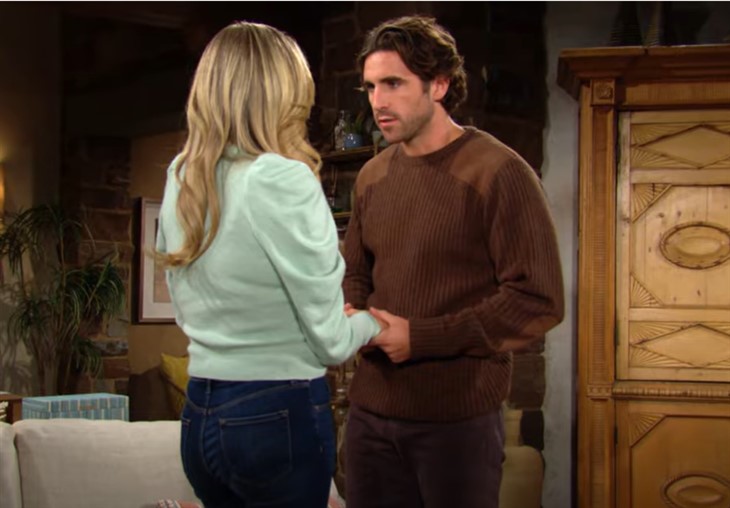 The Young and the Restless spoilers reveal that during the week of November 29, Abby Newman-Abbott-Chancellor (Melissa Ordway) and Chance Chancellor (Conner Floyd) are finally reunited. It is a heartwarming and exciting moment that fans have been waiting for. However, Abby is stunned when Chance says he can’t go home yet.

Y&R spoilers reveal that after Abby’s wedding, she wanted to get started on a family right away. However, Chance was called to participate in a dangerous mission. Even though Chance didn’t want to leave Abby, especially since they were about to start the process of surrogacy, he felt that he had no choice.

After months of silence, Abby was told that there was an explosion and Chance was dead. It was only after finding a clue in Chance’s box of mementos that she even found him.

When Abby arrives at Kim Dunaway’s (Roxanne Hart) house in Spain, she expects to see Chance fight away. However, Kim needs Abby to take a deep breath and calm down first. Then, Kim will try to prepare Abby for the man she is about to reunite with as he isn’t exactly the same. Chance is the sole survivor of that mission, which means he has survivor’s guilt. Plus, Chance also feels a ton of rage and is determined to bring down the enemy.

The Young And the Restless  – Heartwarming Embrace

The Young and the Restless spoilers reveal that while Kim is talking to Abby, Chance pops into the room. Chance explains that nobody could call Abby because it was too dangerous. The two do share a heartwarming embrace, but then Chance reprimands Abby for risking lives by coming to Kim’s house. Abby says that she has come to take him home. That is when Chance drops a huge bombshell that leaves Abby shaken.

Chance says that he can’t leave Spain yet and return to Genoa City. Chance insists on completing the mission. Abby tries to beg him to reconsider and that there is no mission anymore. However, Chance won’t budge and stands firm. It seems as if Abby’s nightmare isn’t quite over yet. Just how much danger are Chance and Abby in right now? What happens when Abby’s loved ones manage to track her down? Will they be in grave danger as well?

What do you think of Chance and Abby’s story? Will Abby stay with Chance in Spain despite the danger? Or will she be forced to return to Genoa City by herself and have to cope with not knowing if Chance will survive completing the mission? Let us know your thoughts and keep watching the CBS soap to find out what happens next.