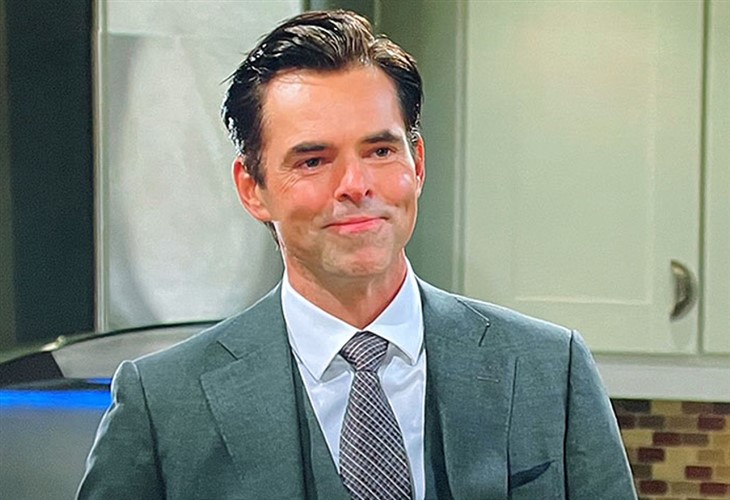 The Young and the Restless spoilers reveal that Billy Abbott (Jason Thompson) is playing nearly everyone. Billy wants everyone to think that he’s falling apart. The disgraced former co-CEO pretends to be drunk in the morning when he’s really sipping a club soda. As word gets around of Billy’s downward spiral, the plan could cost him custody of his children.

The Young And the Restless Spoilers – Victor Newman Gloats

Y&R spoilers reveal that Billy has seemingly lost everything. People in Genoa City expect Billy to completely fall apart. So, Billy comes up with a plan to make everyone think he’s drunk and gambling again. Victor Newman (Eric Braeden) is relishing in Billy’s downfall and Adam Newman (Mark Grossman) has even stopped by to gloat. Billy told Lily Winters (Christel Khalil) the plan and warned she wouldn’t like it one bit.

Sally Spectra (Courtney Hope) noticed Billy drinking in the morning and offered a listening ear. However, Billy wasn’t telling her anything that he didn’t want to get back to Adam. Once Sally skedaddled, Billy knew she would tell Adam everything that just happened. That is exactly what Billy was counting on.

The Young And the Restless Spoilers – Victoria Newman-Locke Protects Children

The Young and the Restless spoilers reveal that while Billy is letting everyone think he’s drinking and gambling again, Lily puts on her own act in front of Victoria Newman-Locke (Amelia Heinle). However, this plan could backfire in more ways than one. When Victoria let Ashland Locke (Richard Burgi) move in, the children went to live with Billy and Lily.

The kids are at boarding school and Victoria plans on letting them stay there. Victoria made it clear that’s her decision and that’s exactly what she’s going to tell Billy. So, the kids aren’t around to get mixed up in this mess. However, that doesn’t mean that custody won’t become an issue.

In Soap Opera Digest, Thompson teased that the plan could end up backfiring on Billy.

“It looks like Billy is falling into his destructive patterns again. Billy has come up with a scheme to turn the tables on Victor and Adam. Billy wants to hit them back like they hit him. Whatever he has planned, it’s very important how he takes the next step. However, not every plan is a good one.”

The holidays are coming up, which means the kids would probably come back to spend time with their parents. If Victoria believes that Billy has gone back to his destructive old ways, she might reason that he can’t be around the children. Even if Billy and Lily admit that the drunkenness was just an act, there are multiple witnesses who will say otherwise. This could affect Billy seeing his kids for a long time, not to mention there could be other unforeseen consequences.