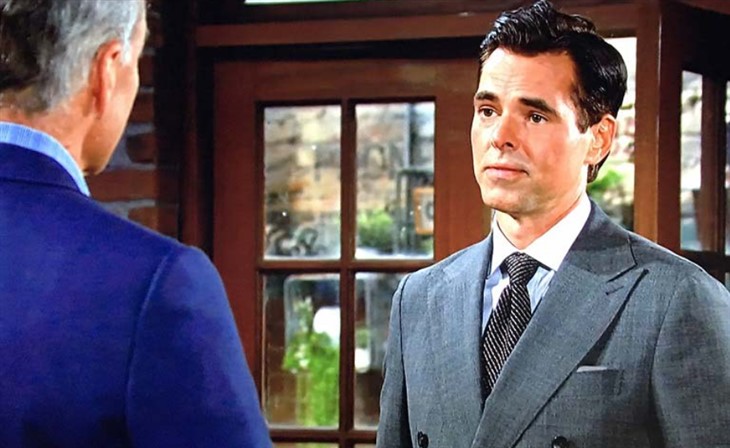 There’s no one more determined than Billy to make sure these nuptials don’t happen, but he’s facing snags around every corner. Billy was all set to pay Jesse Gaines (Jamison Jones) and hopefully get the dirt he needed, but Victor Newman (Eric Braeden) took matters into his own hands.

After Billy learns Victor sent Gaines packing, he’ll be back at square one when it comes to stopping the wedding. Billy will inevitably get updates from Nick Newman (Joshua Morrow), who’ll reveal that Ashland is actually Bobby DeFranco – a man who faked his death in a car crash over 40 years ago and took the real Ashland’s place.

That’ll make Billy even more convinced the secrets they’ve learned are just the tip of the iceberg. Billy has a feeling there’s something so horrible buried that even Victoria couldn’t ignore it. He just wants to get his hands on that info and convince her to call off the ceremony before it’s too late.

The problem is Billy will be barred from attending the event – first by Nikki Newman (Melody Thomas Scott) through a verbal warning, then through Victor bringing Billy’s plans to an abrupt halt. Victor might have Billy forcibly removed if he shows up to make one last effort to shut this wedding down.

What Billy’s perhaps going to need is an ally – someone who knows how dangerous Ashland can be and who isn’t as close to the situation as the Newmans. Could Kyle be just the guy for the job?

Kyle and Summer Newman (Hunter King) have been happily raising Harrison Locke (Kellen Enriquez) in Milan thanks to Ashland, but what if Billy digs up some truly sinister stuff? Kyle might see that this “changed man” thing is all an act and worry about what the future holds.

That could once again leave Kyle concerned about what Ashland’s capable of. Billy has already insisted he doesn’t trust Ashland around his children, so he may push Kyle to see that Ashland needs to be handled permanently – for the sake of Johnny Abbott (Holden and Ryan Hare), Katie Abbott (Sienna Mercuri) and even Harrison.

Billy may find something that proves Ashland belongs in prison, not in Victoria’s home playing stepdad. Back when Summer was blackmailed into dumping Kyle, she asked Billy to look out for him. It established an intriguing alliance that could come back into play when Billy needs a favor of his own.

The Young And The Restless Spoilers – Kyle Abbott Returns

Since we know Kyle will return for multiple Y&R episodes this October, it’d be nice to see him do more than stand around and look handsome. If Kyle has locked in legal rights to Harrison as expected, that could help him go into this battle with less trepidation. Another Ashland and Kyle showdown for the road would definitely be entertaining!

We’ll fill you in as other Y&R news comes in. The Young and the Restless spoilers say Billy will do whatever it takes to destroy Ashland and the wedding of the century, so stay tuned to see if Kyle might become part of the equation.

CDL’s where you want to be for terrific Young and the Restless spoilers, updates and news, so make us your top source.