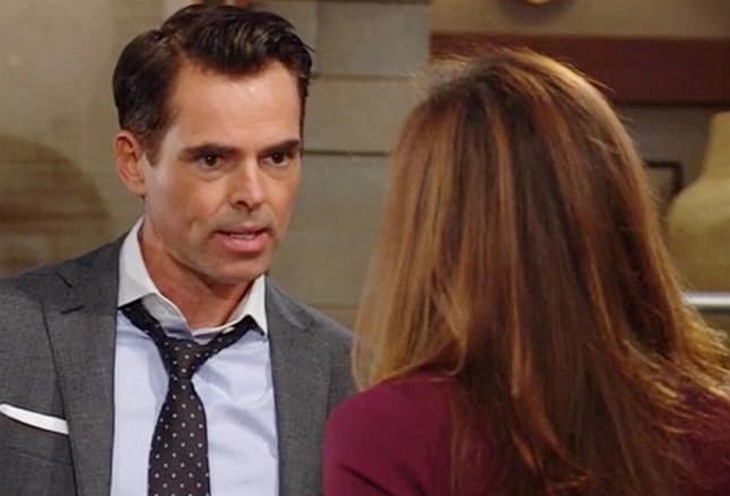 The Young And The Restless Spoilers – Did Billy Abbott’s Move Against Ashland Locke Backfire?

Viewers of The Young and The Restless will recall that it was Billy who offered to pay Jesse Gaines (Jameson Jones) more to spill the Camilla Rhodes (uncast character) tea on Ashland Locke (Richard Burgi) than Victor Newman (Eric Braeden) did to make him go away!

Gaines approached Locke upon hearing he has cancer, and being afraid his gravy trail would go away, considering Locke had been paying him for his silence for many years!

It was later revealed that Gaines is the son of Camilla Rhodes’ attorney, and that he knew the secret that Locke had stolen his best friend’s identity and gotten a job with her after the friend died in a fiery crash in which Locke was a passenger. Nick Newman (Joshua Morrow) had found out more about the story when he found out Locke’s true identity as Bobby DeFranco by going to New Jersey and asking a lot of questions, which Locke and Victoria Newman (Amelia Heinle) didn’t appreciate!

But now, after all is said and done and Billy is tempted to publish a big exposé with a letter of proof from Camilla Rhodes indicating Locke was to receive nothing and her attorney and Locke had gotten her money through fraud, he decides not to publish the story and here it is all over the internet anyway!

Y&R spoilers tease Billy and Lily scrambling for an explanation – and ask one of their reporters if she knew anything about it. She replied that Billy had sent her an email giving her the go-ahead – but Billy denies sending it! Lily asks for a copy of the email in question to be forwarded. Of course, viewers of The Young and The Restless can pretty much figure who is really responsible for the forged article – Adam and Victor Newman (Mark Grossman, Eric Braeden)!

Adam is a pretty good hacker when he has to be, and this time it was with his father’s blessing! What Billy and Lily don’t realize – yet – is that Gaines was in on the plot too! At the Newman Ranch, Victor checks out the forged article about Locke, and Gaines is at the ranch with Adam!

According to The Young and the Restless spoilers, Victor congratulates Adam on a job well done and Gaines as well, telling him he played his role perfectly – although Gaines was obviously pushed a bit, saying he didn’t really have much of a choice! Gaines didn’t really want it to come out like this, but Adam reminds him he saved his own skin, and there is no shame in that – and the job isn’t done completely yet, so Gaines needs to get over it!

The Young And The Restless Spoilers – Billy Abbott And Lily Winters Find Out They’ve Been Had!

Viewers of The Young and The Restless can expect that Billy and Lily with him will go looking for Gaines, thinking that perhaps he hacked into the ChancComm system and published the article himself! They find he’s gone – and Lily knew he’d go rogue! She tells Billy he never should have trusted him! Billy tells Lily Gaines might be selfish, but he’s not a fool.

Ashland and Victor will go after him if they figure out he’s responsible for the exposé! Lily thinks he’s running scared because he got in over his head, but then viewers of The Young and The Restless will see Lily and Billy suspecting maybe Gaines didn’t do this on his own, and figure that Adam and Victor did it!

They return to the ChancComm offices, and Billy receives texts from both Ashland and Victoria, wanting answers. Victoria threatened a lawsuit – Lily wants to publish a retraction, but Billy thinks it’s too late! He doesn’t even want to talk to his ex!

Lily considers possibly making public that they were hacked – but Billy disagrees, thinking it will make them look like amateurs and out of control. Lily acknowledges they weren’t in control, and then as Billy tells her the story was true, Gaines walks in and tells them it’s not – and that he made the whole thing up in order to hurt them!

GH Spoilers: Laura and Sonny Discuss How To Handle Spencer