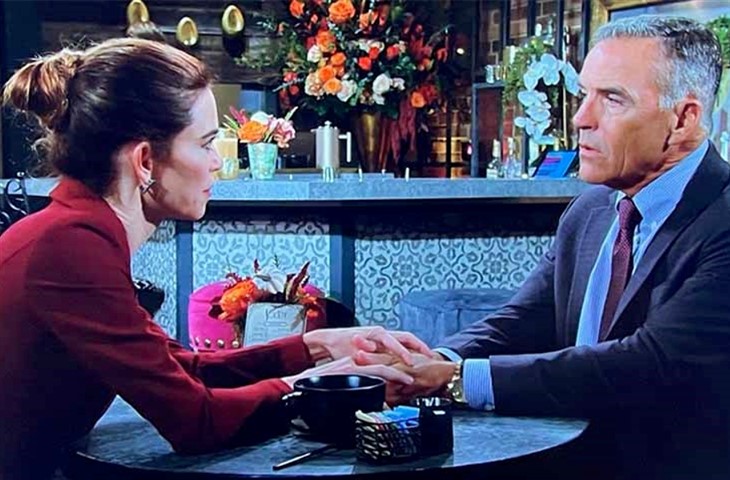 The Young and the Restless spoilers reveal that Victoria Newman (Amelia Heinle) and Ashland Locke (Richard Burgi) could get burned. It is confirmed that Lily Winters (Christel Khalil) keeps up appearances to Victoria. That suggests that Lily has a plan to defeat “Ashtoria,” which Jill Abbott (Jess Walton) is likely in on.

The Young And The Restless Spoilers – Billy Abbott’s Big Mistake

Y&R spoilers reveal that Billy refused to accept that Victoria was marrying Ashland. Billy went to great lengths to expose Ashland’s secrets. The situation spiraled out of control and several different characters got thrown into the mix. Then came the day when Billy played right into Victor Newman (Eric Braeden) and Adam Newman’s (Mark Grossman) hands.

Now ChancComm lost their source, Jesse Gaines (Jamison Jones) publicly recanted and a retraction had to be printed. That wasn’t enough though as Ashland is suing ChancComm for libel and Jill mentioned that profits are dwindling after Billy’s big mistake.

Jill offered Lily the position of being the head of Chancellor and she’s considering selling the ChancComm division. Jill already had a conversation with Victor about what he and Adam did to Billy. Even though Jill is furious with Billy’s actions, she is also his mother and loves him.

Later, Billy tried to educate Jill on how dangerous Ashland is. Billy even mentioned that Ashland is now a stepfather to his children and they call him the “Locke-ness Monster.” As Jill listened, the look on her face turned from annoyance to concern.

The Young And The Restless Spoilers – Lily Winters’ Trickery

The Young and the Restless spoilers reveal that during the week of December 6, Lily will keep up appearances with Victoria. So, that suggests that Lily will need to make Victoria convinced that things are going her way. Jill might come up with a plan to make “Ashtoria” believe they are going to sell the division back to them at a rock bottom price.

However, Jill could have other plans, which include a bidding war. There is no way that Jill is going to let “Ashtoria” take ChancComm. However, she also knows that while they formulate a plan, they need to use the element of surprise. Let Ashland and Victoria believe they are winning, then blindside them when a last-minute bid comes in from a surprising source.

Billy might not be allowed to have any decision making roles in ChancComm. However, what if Jill changes her mind about his new position? Instead of working under Lily at Chancellor, what if Ashland and Victoria lose to a bid from Billy Abbott himself?

Billy could create a new company that “Ashtoria” wouldn’t have time to investigate before bidding closed. Billy could be the new owner of ChancComm but the paperwork would dictate that he has no decision-making power. That would keep Billy’s relationships with Lily and Jill on good terms and give ChancComm a fresh start under a different company — which could help salvage how readers view the publication. It would also prevent Victor, Adam, Victoria and Ashland from winning.