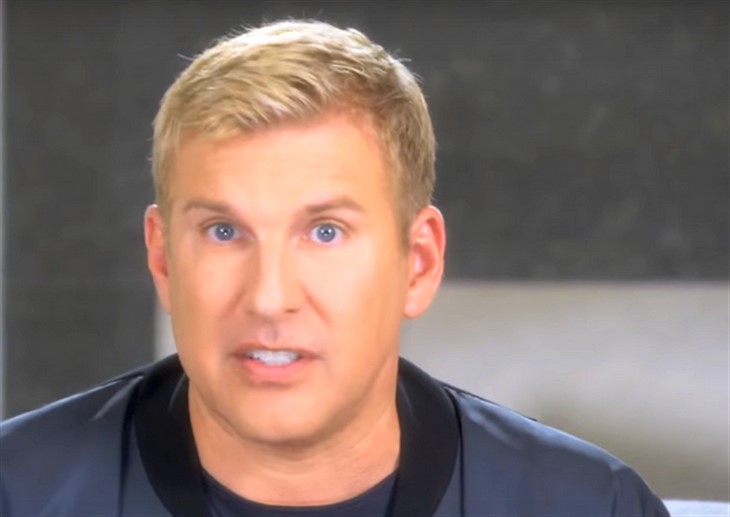 Todd Chrisley from Chrisley Knows Best goes after YouTube blogger Katie Joy who runs the Without A Crystal Ball channel. The feud between the USA Network star and Katie goes back a few weeks and escalated to open threats on social media. In fact, it even seemed to overshadow the premiere of Season 9, titled The Botox Monster. Of course, fans of Katie and Todd both take sides in the feud that involves Todd’s daughter Lindsie and allegedly, something to do with a Georgia Tax investigator. If you don’t know, Todd faces federal charges for tax wire fraud and more related issues.

Todd told his Chrisley Confessions podcast fans that he moves on Katie Joy. Well, she sent him a cease and desist letter, alleging he threatened her and her husband. Later, she talked about counter-suing him for defamation. Plus, she claimed all she’s doing is protecting her sources. Additionally, she clearly states on her YouTube, that she gives opinions. So, she intends to stand on her rights of freedom of speech to make those opinions about a public figure.

Todd Chrisley recently announced his long-term plans for a political career in South Carolina. However, he also faces those pesky federal tax charges that might land him inside of prison if found guilty. And, Katie Joy seemingly takes some comfort from that. In fact, a few days ago, she sarcastically wished him luck with his court hearings. Anyway, baiting and counter baiting each other ended up with Todd saying on Twitter, “She’s sitting for a 7 hour deposition and she is going to be sued, no matter how much shit she spits out, her reality is approaching. I love that she’s making our job so much easier.“ 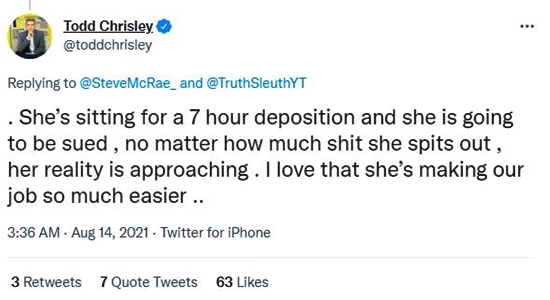 It came after someone pointed out to Todd Chrisley that Katie made yet another video about him on her Without A Chrystal Ball channel.

In another tweet, the patriarch of Chrisley Knows Best noted that everything Katie says or shares is being recorded. Of course, that could equally apply to his public chatter about her on social media and on his podcast.  Either way, it looks like both of them keep lawyers busy right now. Todd’s attitude seems to be that he’ll swipe the independent journalist like an annoying mosquito of no consequence. Meanwhile, people who appreciate the right to freedom of speech wish Katie well in her legal feud. She hit back at Todd on Friday on her YouTube channel.

On YouTube on August 13, a fan who backs Katie Joy against Todd Chrisley said, “I’m so here for you having proper legal representation and being well educated on your rights as an individual and a member of the press🔥👏👏👑.” Meanwhile, others who don’t appreciate the humor of Chrisley Knows Best felt that Todd thinks he’s bigger than he really is amongst the American TV audience. They wrote, “Todd is a bully. He enjoys a peculiar sort of popularity in a small group of people. But he comes off as foolish. His upcoming prison sentence probably won’t be enough to shut him up, but maybe it’ll mute him a bit.“

YouTuber Denies She Ever Defamed The USA Network Star

Katie Joy noted in the comments of her latest YouTube, “While I realize many of you think you know what is going on, due to what he’s said publicly, I KNOW what he’s said to my legal team. Which has been demands for information based upon a deposition. They have not offered a single statement to my team that shows that I defamed them. They have not provided evidence of a single video or article where I defamed them. They are only after information. Period.“

Remember to check back with us often for more news about the feud between Todd Chrisley and YouTube blogger Katie Joy. If you have not watched Season 9 of Chrisley Knows Best, Episode 2 airs on August 19, 2021, at 9 pm ET on USA Network.

GH Spoilers: Dante and Sam Get Flirty on Their First Date!