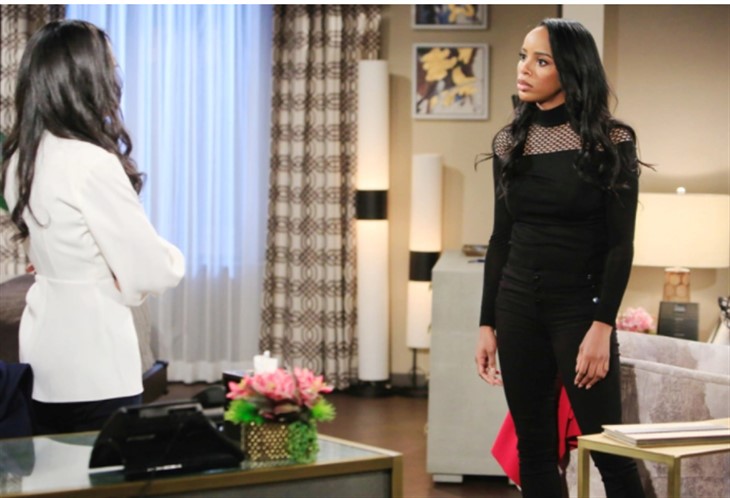 The Young and the Restless (Y&R) spoilers document that Devon Hamilton (Bryton James) is starting to fall in love with Amanda Sinclair (Mishael Morgan), or at least that’s how it appears. There’s no doubt that these two characters are bonding.

A compelling arc is being written that could see Devon and his deceased wife’s identical twin sister become a couple. But Demanda, a hashtag intended nickname that can be used if one wants, is not Hevon from the jump. And then there’s the eventual possibility that Devon and Imani Benedict (Leigh-Ann Rose) form a personal bond, or even fall in love themselves.

The Young And The Restless Spoilers – Amanda Sinclair’s Emotional Backstory

Amanda didn’t know why she grew up without a family. Her recent pursuits have revealed that answer, with Naya Benedict (Ptosha Storey) being definitively identified as her mother.

However, as viewers have sadly seen, Naya’s tell to her surviving twin daughter was harsh. Storey’s character did express genuine emotion about the choice her parents forced her to make, in giving up twins. But she is confident in believing that it was the right decision to have made.

Imani, who is Amanda’s maternal half-sister, has emerged as a force that is preventing Morgan’s character from being able to form some type of connection with their mother. That makes sense on a family level, as Imani believed she was an only child until recently. The Benedict family’s public position has shaped how Imani thinks.

It would surely create engaging conflict if Imani is written more deeply into the storyline. Considering the instantly sparked rivalry between the sisters, having Imani intentionally pursue Devon, or develop a more natural romantic relationship with him, would certainly represent good soap.

The Young And The Restless Spoilers – Devon Hamilton Dealing With Hurt

Following Hilary’s death, Elena became the leading source of solace in his life. Y&R created a natural story that allowed Devon and Elena to fall in love and appear to be heading toward the altar sometime in 2021. But last year’s fallout derailed expectations.

A pattern could repeat, with either Amanda or Imani becoming the lady who helps Devon work through the hurt he feels due to the loss of Elena’s love. His next romantic match can easily be Amanda, but positioning Imani as an option would create a conflict dynamic.